Watch! Dinesh Karthik gets a royal welcome after his whirlwind innings 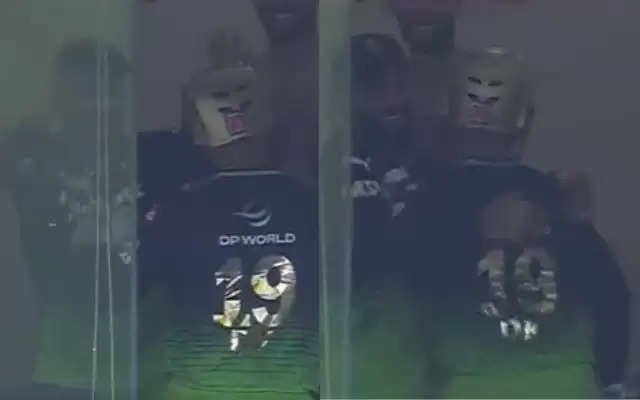 TATA IPL 2022 is seeing a lot of resurgent stories and one of the biggest stories is that of veteran wicket keeper batter Dinesh Karthik. The 36 year old from Tamil Nadu has virtually replaced AB De Villiers at Royal Challengers Bangalore and has been one of the stars of the show. Karthik again showed his value with the bat as played a mind blowing innings against Sunrisers Hyderabad in the afternoon game at the Wankhede Stadium which not only enthralled and entertained the crowd but also his team mates.

Dinesh Karthik came into bat when the RCB score was 159 for 3 with Maxwell out for 33. There were just 8 balls to go in the innings, but what followed was absolute carnage. The first 3 balls of his innings , Karthik scored a mere 2 runs. The 4th ball saw him smack Tyagi for a huge six. The final over was given to debutant Farooqi from Afghanistan, and the left arm pacer gave just 3 runs from the first 2 balls before Du Plessis turned the strike to Karthik. The next ball was a six as Tripathi dropped an easy chance. The 4th ball was again hit for a six and DK was 20 off 6 balls. The fifth ball saw a hattrick of sixes hit and the last ball saw DK hit it for a four to finish on 30 off 8 balls to help RCB reach 192 on the board. Once Karthik made his way inside he was given a bow by Virat Kohli and there were back slaps for the effort.

Faf Du Plessis carries his bat through the innings –

Chasing 193 to win Kane Williamson was out first ball of the innings when he was run out , the same over Abhishek Sharma was out bowled to Maxwell to leave SRH at 1 for 2. Markram and Tripathi added 50 for the 3rd wicket before South African fell for 21. Apart from Tripathi who scored 58 none of the other batters stood up as Hasaranga picked 5 wickets for 18 runs to help RCB win by 67 runs. The win saw RCB consolidate their 4th place standing as SRH stayed in 6th place after their 3rd loss in a row.