Watch! Kohli’s reaction after the wicket of MS Dhoni as he gets slammed by the fans 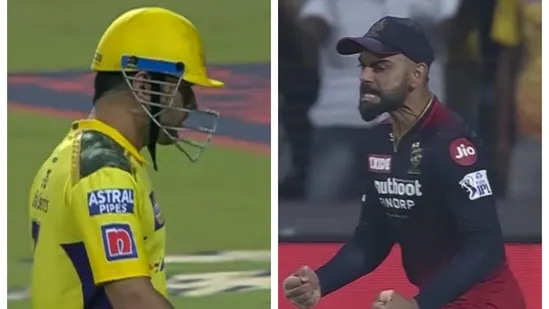 Royal Challengers Bangalore snapped their bad form to post their 6th win of the season and move to the 4th place in the table. The much anticipated return fixture of the southern derby saw RCB win by 13 runs against CSK to push the defending champs on the brink of elimination. The match swung like a pendulum till RCB took control and got the situation under control with the bowlers firing them to a win. Kohli yesterday was the man in focus as his curious behavior left everyone in shock.

The start of the 19th over saw CSK needing 39 runs from 12 balls with MSD on strike facing up to former CSK pacer Josh Hazlewood. If there was one person who could do the impossible it was MSD but the very first ball saw him get a short ball which he tried to pull and saw the ball nestle into the hands of Kohli. The former India skipper was seen to be celebrating animatedly and was seen yelling out a few expletives which was caught by the cameras and the fans.

CSK one step closer to elimination –

Chasing 174 to win, CSK would have expected Gaikwad and Conway to give them a good start like they did in the last game. The pair added 54 for the opening stand in quick time before Gaikwad was out for 28 caught by Prabhudesai off Shahbaz Ahmed. Then Maxwell struck twice when he first had Uthappa out for 1 and Rayudu bowled for 10 to have CSK at 75 for 3. Devon Conway got his 2nd fifty in a row before he fell to Hasaranga for 56 off 37 balls with 6 fours and 2 sixes. Moeen Ali tried to fightback a bit with 27 balls 34 but the RCB bowlers were holding their own in defence of their 173 on the board. The loss now leaves CSK in the 9th place with 6 points and now need a miracle to head into the final 4 with just four games left to go, they would need other teams to fumble to reach the play-off places.

Once Virat Kohli was seen celebrating the wicket of MSD in such a manner the cricket fans took to twitter to voice their opinion and show their disgust on twitter. You can read the tweets embedded below.

Virat kohli sending off dhoni after
His wicket pic.twitter.com/ToyaHR2OqK

No can stop CSK from winning tonight 💪