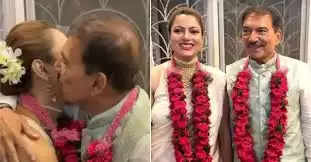 Marriages they say are made in heaven and a special bond between two souls. Arun Lal the former India opener tied the knot for the 2nd time on 2nd May, 2022. The former India opener married Bulbul Saha who is nearly 3 decades younger to him. Lal who is the coach of the Bengal Ranji team and also a well known commentator is spending his post married period with his newly wedded wife.

Arun Lal’s reply to the journalist –

Arun Lal 66 year old former India opener and a domestic giant of the game is basking the glory of his marriage to Bulbul Saha last Monday. The couple got married in a small ceremony which included just a few family and friends which also included former India captain and current BCCI chief Sourav Ganguly. Speaking to the media, Lal was pretty happy with the next phase in his life. Speaking to Zee News he said “I am very happy. This is another special moment in my life. I love Bulbul a lot and we will be a happy couple all our lives”. When asked about his honeymoon plans he said “Ranji trophy is our honeymoon”

This is Arun Lal’s 2nd marriage –

Arun Lal played 16 test for India scoring 729 runs from 1982 to 1989 with a best score of 93 and 6 fifties. He also played 16 ODI game scoring 122 runs with just a single fifty. He played 156 domestic games scoring over 10,000 runs with 30 centuries and 43 fifties at an average just shade under 47. Lal had split with his first wife but was continuing to stay with her as she is undergoing health issues and sought her apoval before marrying for the 2nd time.