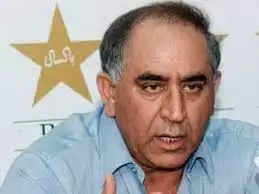 There is no bigger game and bigger than allure than watching India and Pakistan playing cricket with each other. The two traditional rivals guarantee box-office everytime they play against each other. Over the last decade the two rivals have played each other in just ICC or Asian Cricket Tournaments. The World Cup, World T20 or Asia Cup are the only engagements the fans get to witness when it comes to India-Pakistan clashes. Former Pakistan Cricket Board chief Tauqir Zia has now come out and made some strong claims about the future of cricket between the two neighbors.

Former PCB Tauqir Zia has said that the BCCI has never said no to playing Pakistan in a bilateral series, but aimed his guns at the governments of both countries for the lack of sporting interaction. Zia also said that the two boards, BCCI and PCB were run by former cricket captains who wanted to elevate the game. BCCI is headed by Sourav Ganguly while PCB is headed by Ramiz Raja. Zia while speaking to Cricket Pakistan said “BCCI has never refused to play against us [Pakistan]. The problem lies on the government-to-government level. Both cricketing boards are currently run by former cricketers who understand the importance of Pakistan-India matches. Sourav Ganguly and Ramiz Raja both want to promote cricket and there is nothing better than seeing a contest between these rival”

Ramiz Raja had recently proposed a series with India, Pakistan, Australia and England in a 4 nation series. The tournament was nipped in the bud with so much cricket being played and a congested calendar was cited as the reason. Speaking on this Zia said “Although the four-nation series was a great idea there are already so many franchise-model tournaments happening throughout the year. Because of this, I do not think there will be enough room left to gather the four nations in one timeframe,"