Watch! Hampshire hold on to a sensational win over Lancashire to take home the Vitality Blast 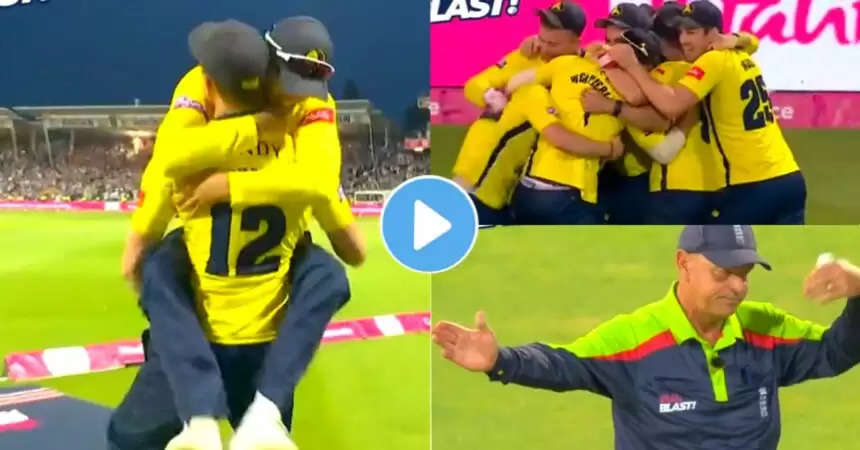 T20 cricket season is going on in full steam and this year the Vitality blast has been nothing short of dramatic. July 16th, 2022 witnessed the finals day of the Vitality Blast T20 tournament which is England's biggest domestic T20 bash. Edgbaston ground in Birmingham saw two traditional forces in Hampshire take on Lancashire in a final that is sure to go down in thew history of the league as the best ever.

Hampshire batted first opened with captain James Vince and Ben Mcdermott. Vince the english international player was the first go when he was sent back to the dugout bowled by Richard Gleeson. The 34 year old recently shot to fame when he got rid of Kohli amongst others on his T20 debut. Luke Wood struck next when he had Tom Priest out for 2 to make it 15 for 2. Weatheley and McDermott added 43 runs from 33 balls before Parkinson got Weatherley out for 9. it was soon 67 for 4 as Liam Dawson fell for 2 to become Parkinson's second victim.

McDermott falls but the lower order shows its might -

With all the wickets falling around him, McDermott was fighting a lone battle, but Parkinson had him bowled to make it 90 for 5. McDermott was out for 62 with the help of 4 fours and equal number of sixes. Luckily the lower order of Hampshire came to the fore as they added some crucial runs with the bat. Whiteley (22), James Fuller (10), and Chris with 20 not out helped Hampshire reach 152 on the board.

Phil Salt who is part of the England squad for the final ODI against India, scored 3 ball 12 with a four and six. Just when he seemed like doing damage, he was prized out by Wood caught by Prest. Jennings fresh of a career best triple ton then added 60 for the 2nd wicket with Croft in quick time. The stand was broken by Mason Crane when Croft fell for 36 caught by McDermott. Jennings was the next to for 24 off 20 balls with a four and six when he was dismissed by Liam Dawson.

Hampshire bowlers hold on for one run win -

Hampshire then kept chipping away the wickets when they had Dane Vilas out for 23 off 21 balls. The match turned on its head when big hitting Tim David was caught in front of his stumps LBW for 8. From there Lancashire kept losing wickets at regular intervals and despite the late order trying to put up a fight, they lost by a run as Hampshire bowlers kept their cool. The Hampshire players were happy after the win as there was mass celebration in the camp.

One of the crazy endings ever for a T20 final - at the end Hampshire won by just 1 run. pic.twitter.com/kvmh6h5ksh