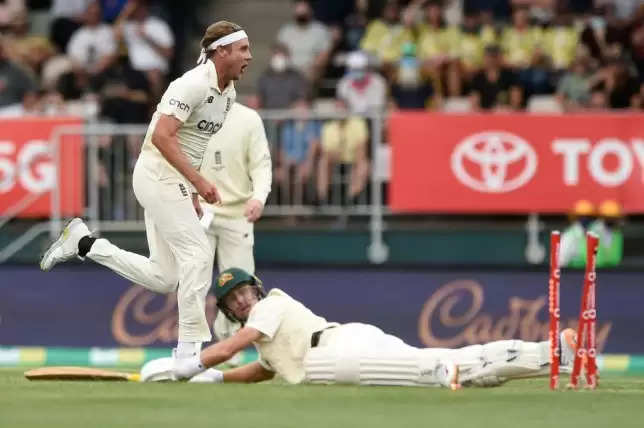 The 5th and final test match of the Ashes series is being played at the Bellerive Oval at Hobart. This is the first time Ashes is seeing two day and night test matches being played. The match which was supposed to be played at Perth is being hosted by Hobart. Australia have already retained the urn under first time captain Pat Cummins. Australia came into the final test match with a 3-0 lead in the series with the 4th test at SCG being a draw. The match got underway late due to rain and the action witnessed has been unbelievable so far.

One of the most bizarre dismissal ever! pic.twitter.com/Pl1lfxW38J

Australia won the toss and chose to bat first under overcast conditions. The English bowlers struck early when they had the key wickets of David Warner and SCG hero Usman Khwaja who replaced Marcus Harris as the opener. Marnus Labuschagne got off to a blazing start as he went after the English bowlers and scored some quick runs. Labuschagne who copies his batting style to Smith walked across way outside off stump and slipped. Stuart Broad who bowled a full ball hit the stumps much to the delight of the English and amusement of fans and experts.

Australia fight back after quick loss of wickets –

Labuschagne fell for a 53 ball 44 with 9 fours to his name while Steve Smith fell for 2 ball duck. Travis Head and Cameron Green though went after the English bowlers and counter attacked. At the time of writing Travis Head was on 90 with Green on 44 and the pair had added 108 runs of the 5th wicket. The English bowlers namely Broad and Ollie Robinson have picked two wickets each. Sam Billings is making his test debut for England today.  Australia are 3-0 up in the 5 match series after having won the first 3 matches with ease against a under-firing English team.