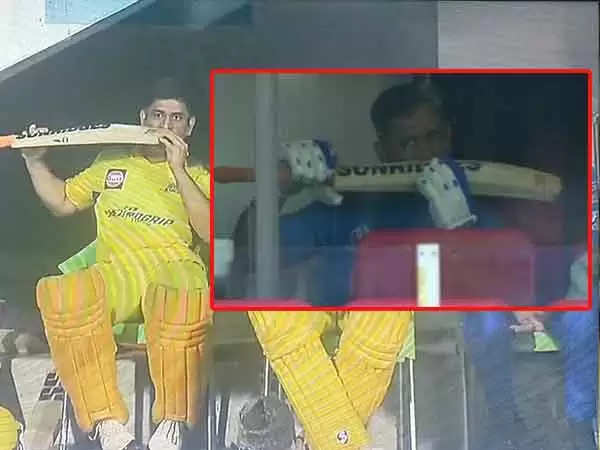 MS Dhoni over the past 20 years has done many things for both Indian and IPL cricket to be put on the map. When he began his career he was known as a swashbuckling batsman who could put any bowler to shame. Everyone flocked to the ground to see his huge sixes and his entertaining batting. Over the years Dhoni became an accumulator of runs and played according to the team situations. One of the quirks that the fans have noticed is MSD chewing his bat before going to the wicket.

Amit Mishra is a veteran of Indian cricket and he has played the game for over two decades. The veteran leg-spinner despite being one of the leading wicket takers did not find a team for himself as he wasn’t picked during the auctions this year. Mishra has seen MSD up close and personal after spending a few years in the Indian dressing room. Mishra finally revealed the reason for this quirk when he said on Twitter “In case your wondering why Dhoni often ‘eats’ his bat. He does that to remove the tape of the bat as he likes his bat to be clean. You wont see a single piece of tape or thread coming out of MS’s bat”

In case you’re wondering why Dhoni often ‘eats’ his bat. He does that to remove tape of the bat as he likes his bat to be clean. You won’t see a single piece of tape or thread coming out of MS’s bat. #CSKvDC #TATAIPL2022


Chennai hangs on to the IPL qualification hopes –

Sunday witnessed Chennai beating Delhi by a whopping 91 run margin and moving up to the 8th place. The win meant that Chennai now have the barest of chances of making it to the top 4. The defending champs still have to win all their games and hope for the other results to go their way. It was a complete performance with the bat and ball as Chennai completely steam rolled the challenge posed by Delhi to win the game by a huge margin on Sunday night at the DY Patil stadium. The win over Delhi was CSK’s 4th of the season giving them 8 points from 11 games with 3 games in hand. Chennai next play Mumbai on Thursday.