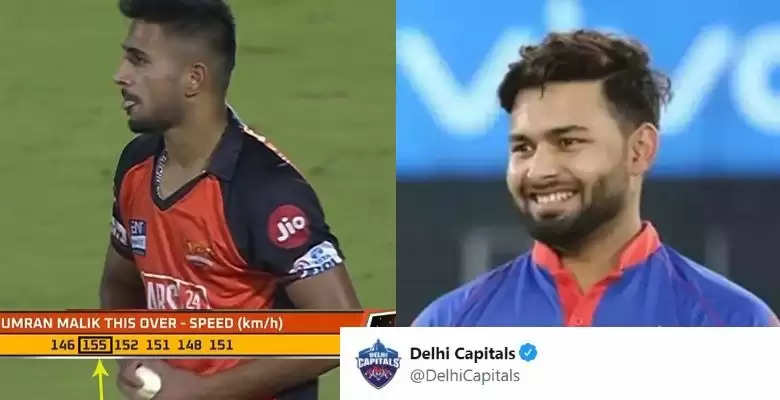 The heat is certainly on in mumbai as the race for the IPL play-offs gather steam. Before the game began Delhi Capitals were feeling the heat as they had showed patchy form. They had lost their previous game to the Lucknow Super Giants on Sunday. SRH too had lost the last game after a spate of wins which propelled them to the tags of the favorites of the tournament. The match saw Delhi beat SRH by 21 runs as they leapfrogged the Men In Orange to jump to number 5 in the table and push SRH to 6th in table based on run-rate.

It was a memorable day for fast bowling fans as Umran Malik upped the heat by bowling the quickest spell in the IPL. The 22 year old was expensive from his 4 overs but was bowling hostile which made for amazing viewing. The final over of the innings was given to Umran Malik and it was big-hitting West Indian Rovman Powell who was on strike. The first ball was bowled at 153 and it went for a six, the 2nd ball was a dot ball, the 3rd ball was for hit for 4. It was the 4th ball where the magic happened as the ball was recorded at 157 KPH. Powell muscled it for a 4 with none of the fielders moving and the ball travelled at the speed of light. That’s when Delhi Capitals took to twitter and wrote “Came in at 157 KPH, went back at 200. A Powell welcome for Umran”

A Powell welcome for Umran 🔥🔥#DCvSRH

David Warner came off the best batter of the night as he showed his class with a brilliant 92 not out. This was an innings filled with emotion and vengeance as the former SRH captain showed his former side his class after the shabby treatment given to him last season. Powell scored 67 not out off 35 balls as the duo helped DC reach 207. Chasing 208 to win, SRH made a bad start and a slow start and were never in the race to overhaul the target set by DC. Only Nicolas Pooran with 62 and Aiden Markram with 42 were the shining lights with the bat. With this win DC now are 5th in table with 10 points from 10 games and SRH also have the same points from the same number of games played. The only reason DC are in 5th is because of a better run rate compared to SRH.