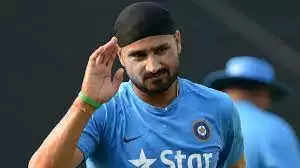 Mumbai Indians and its fans have always seen the Rohit Sharma led side at the podium or in the race for the play-offs. This is for the first time in a dozen years where they have finished in the bottom two of the league. The last time such a thing happened was in 2009 when the IPL was played in South Africa. The Mumbai Indians under Sachin Tendulkar finished 7th in the table just 4 points ahead of KKR who finished 8th. This year MI were out of the race at the half way stage of the tournament.

Harbhajan Singh is no stranger to the dressing room of the Mumbai Indians. The former Indian legend played ten years for the MI team winning 3 IPL titles and 2 Champions League titles as well as being the captain of the team. the 41 year old former off-spinner was impressed by the talents of Tilak Varma who was making his IPL debut and named him as a potential next Mumbai Indians skipper. Varma showed maturity beyond his years and scored 32 ball 34 to help Mumbai home to a win over CSK in a tricky chase of 98. Bhajji said “The thing is right. He has the potential, and we will see him play for Mumbai Indians for many years to come. Tilak alongside David too. I think Tilak will be the future captain for Mumbai Indians”

One  of the players who has made a name for himself during this TATA IPL is Dinesh Karthik. The veteran RCB wicket keeper batsman has impressed one and all with his swashbuckling 360 degree play and has earned himself the right to be called up for the Indian team. Karthik turns 37 this year on 1st June and will hope to be picked for the home series against South Africa. According to Harbhajan had he been a selector he would take Karthik to the T20 WC which is to be held in Australia this year. The Indian legend said “Dinesh Karthik has been outstanding for RCB. He is very good at leg side shots than his off sides, excellent at taking singles but I think, overall he understands his game very well. Whenever he is left with last chances, he makes sure that he finishes the game. For me, if anyone has played the best role of a finisher in this entire IPL then it is none other than Dinesh Karthik. If I were a selector I would have given him a ticket to Australia for World Cup T20 and let him play for India as wicketkeeper and batsman because he deserves that. And if ever Indian Cricket team needs the best finisher then it should be Dinesh Karthik and Hardik Pandya as they make a very powerful side”