Harshal Patel reveals how he was cheated during the IPL auctions 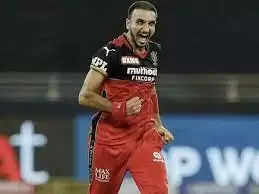 The stocks of Harshal Patel have grown over the last season and a half as the 32 year old has become ther best bowler in the IPL. After making his debut in 2012 it took the right arm pacer from Haryana nearly a decade to become a potent bowler. After finishing at the top of the table for the leading wicket takers during the last season, Patel was given an Indian call up. He had to face a minor disappointment when he was let go by RCB towards the end of last season. This despite RCB just retaining 3 players, he was eventually bought by RCB for over INR 10 crores.

When Harshal Patel was left dejected after not being picked –

Harshal Patel was recently a guest on the Breakfast with champions show with Gaurav Kapur. The 32 year old bowler who has become the talk of the town for his bowling, especially the slower ball, has had to wait a long time to make a name for himself. Patel recounted a painful experience when he wished that some team could pick up the auction paddle. Patel said “(On 2018 auction) I just wanted someone to raise the paddle for me. It's not about the money, I just wanted to play. The ironic thing was that there were 3-4 people from different franchises who said we'd gonna bid for you but kisi ne nahi kiya [no one did]. At that time, it felt like a betrayal, yeh toh jhooth bole hain, dhokha hua hai mere saath [they lied to me, I felt cheated].

Harshal Patel has played a lot against MS Dhoni during his time in the IPL. The 32 year old was picked as a net bowler for India during the T20 world cup last year. The former Indian captain MS Dhoni was with the team in the role of a mentor. This is where Harshal Patel had a chance to interact with Captain Cool. The fast bowler asked MSD the areas he could improve and MSD kept it simple when he said “Mahi bhai said the same thing. I was a net bowler with the Indian team for the T20 World Cup. And I asked him where my vulnerabilities are. 'Where do you think I can get better?' He said, 'Nothing. You have your formula set. All you need to do is learn to read the game better, which you will as you keep on playing. And keep yourself fit”

Harshal Patel since then has gone on to play for India in the T20 format and has made an impressive debut. Harshal Patel recently lost his sister in the middle of the IPL and missed a game. He has played a total of 70 IPL games and picked 87 wickets with a five wicket haul against Mumbai. He picked over 30 wickets during the IPL 2021 season to be the bowler of the tournament. Patel has also played 8 T20 games for India and picked 11 wickets.