Heartbreaking News! Yet another player ruled out of TATA IPL 2022 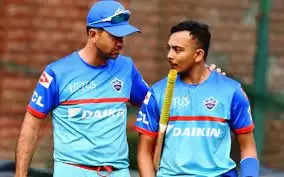 TATA IPL 2022 on Thursday will witness the el-classico of cricket for the 2nd time this season. Chennai Super Kings and Mumbai Indians lock horns as the two are 9th and 10th in the table. A win for Chennai Super Kings will slot them into the 6th place and bring them close to qualification for the play-offs. Mumbai on the other hand have already gone through the exit door and can only play party poopers and take Chennai with them today. While the tournament is in full swing yet another team have been dealt with a severe blow.

Ricky Ponting confirms that Shaw is ruled out of IPL –

Prithvi Shaw who had been hospitalized a few days ago had been missing for the last two games. The 22 year old from Mumbai was showing signs of good form with the bat before his illness. Delhi coach Ricky Ponting has now come out and confirmed that Shaw has been ruled out of the TATA IPL 2022. At the end of the game yesterday the former Australian legend gave a confirmation that Shaw has indeed been ruled out of the tournament and will play no further part. This will severely hamper Delhi as they have just 2 games to go and have to win both to enter the play-offs. Rishabh Pant too said that he missed the services of Shaw, the DC skipper said “We miss him. But we cant control that. He has thypoid or something, like that is what the doctor told me”

Prithvi Shaw has been one of the steady performers for Delhi in recent times. The youngster who is known to be an aggressive batter played 9 games for Delhi and scored 259 runs with 2 half centuries. He was out cheaply in the last two games he played against KKR and CSK. In his absence Delhi have given young Srikar Bharat a chance to open the innings alongwith David Warner. With so much of international cricket around the fans will hope for Shaw to come back fitter and stronger and start scoring runs and delighting the fans again.