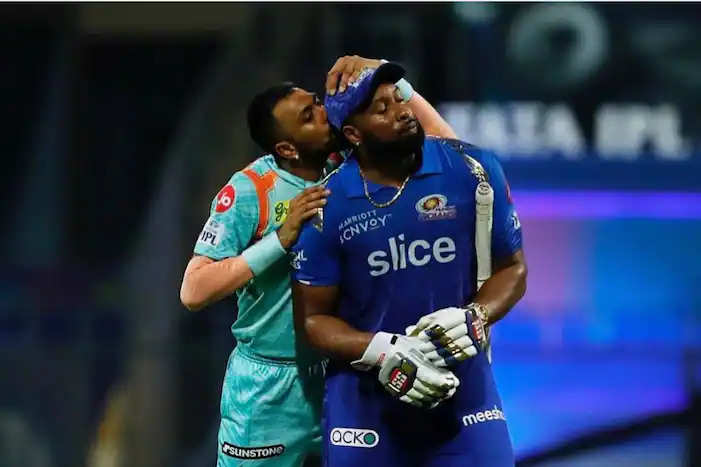 Kieron Pollard for the first time since his long association with Mumbai Indians will not be playing in the play-offs. The 2022 season of the TATA IPL has been a miserable one for Mumbai Indians. With 8 losses in 8 games and sitting 10th in the table, the men in blue and gold became the 1st team to be eliminated from the qualification for the play-offs. Its been a heady few days for Kieron Pollard as his bad form with the bat has coincided  with his retirement from international cricket.

Kieron Pollard reacts to the send off by Krunal Pandya –

Krunal Pandya who for six years was sharing the same dressing room as Pollard was playing against Mumbai for the 1st time. The older Pandya brother fell for 1 when he was dismissed by Pollard. The last over was given to Pandya who had Pollard caught by Deepak Hooda for 19 off 20. The left arm spinner rushed to kiss Pollard on the head, which was soundly criticized by many. Now Pollard has broken his silence when he took to Instagram and wrote “@krunalpandya_official welcome to the collection of wickets. You know how serious I am with my bowling (laugh emojis). In the end it was 1-1(heart emojis)#myboy #greatfriendship #camaraderie. All good fun”

@krunalpandya_official welcome to the collection of wkts… you know how serious I am with my bowling 🤣🤣🤣. In the end it was 1-1 ❤️❤️❤️. #myboy . #greatfriendship #camaraderie . All good fun 💥💥💥. https://t.co/aRjiy6y9Ri

Pollard has been with Mumbai Indians ever since he first played the IPL in 2010. The burly all rounder from Trinidad and Tobago has played 8 games so far this year and hasn’t really sparkled with the bat or the ball. Many experts have questioned Pollard for his poor show with the bat and ball for Mumbai Indians. In the 8 games, Pollard has hit 115 runs and picked mere 3 wickets with the ball. With only 6 games to go and qualification out of question, one would hope Pollard can bring the magic back and make a useful contribution before the end of the tournament. A fit and firing Pollard for Mumbai Indians will hold them in good stead for the 2023 season of IPL.