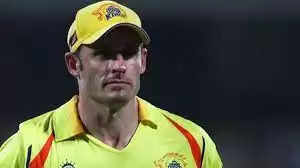 Chennai Super Kings since the start of the Indian Premier League isnt a team alone. The men in yellow are seen as an emotion as the people of Chennai and beyond identify themselves with the men in yellow. Much of the credit goes to the players and thew management for making this happen, but there is one man who binds everyone as a unit and gives the team a family feel. That man is former India skipper and current CSK captain MS Dhoni who has been adopted the state as a son .

MS Dhoni and Michael Hussey have seen the journey of CSK since the start in 2008. Hussey was the first centurion for CSK in the history of the IPL and the Mr. Cricket gave the men in yellow many happy memories. Hussey was recently speaking to Matthew Hayden with whom he shared the Australian and CSK dressing room in a show called “Super Reunion”. Hussey said “I think there’s not one particular memory but we see these championship-winning photos on the wall… I think probably the 2018 season. We were out of the competition for two years. We came back and I remember MS giving a speech right at the start of the season. He actually started tearing; tears were coming out of his eyes and I remember thinking, ‘Something special is happening here"

Making a special return to IPL –

Chennai faced suspension for 2 years along with Rajasthan Royals after the entire spot fixing saga went down. In their place came Gujarat Lions and Rising Pune Super Giants of which Dhoni and Faf Du Plessis was a part of. Just like Hayden and Hussey it was another Australian who went down the CSK folklore for his exploits as Shane Watson scored an unbeaten century to power CSK to their 3rd title. The next year they came close to retaining the title but lost to Mumbai by 1 run. CSK last won the title last year when they beat KKR in the final. Speaking about the 2018 IPL, the former Australia player said “That was a special season. It gives you goosebumps just thinking about what happened that year. It was almost like it was meant to be after coming back to the IPL. MS played unbelievably well throughout the season. It was just a special time”