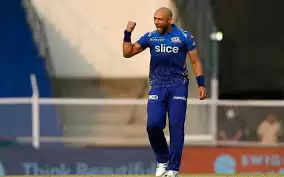 Rohit Sharma and the mumbai indians fans will want to forget IPL 2022 in a hurry. This is the season where nothing has gone right for them. Right from the auction table to the action on the ground, the season has seen the 5 time champs hit a low each time. Mumbai have played 9 games and won just one and lost 8 and were knocked out of the competition at the half way stage of the tournament. Now before their game on Friday against Gujarat the men in blue and gold have been dealt another blow.

Who is Tristan Stubbs –

Tristan Stubbs is a young South African wicket keeper batter who can also bowl a bit of off-spin. The 21 year old has played 17 T20 games and scored 506 runs with a best of 80 not out and has 3 half centuries. He has a strike rate of 157 and has picked a single wicket in his T20 career.

Mumbai next face Gujarat on Friday with nothing to play for as far as the tournament is concerned. The 5 time champs will hope to delay the qualification for the titans and hope to play party poopers for the next 5 games.