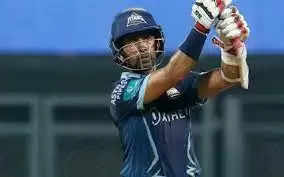 Ever since the start of T20 cricket, it was felt that this form of cricket is just for the younger legs. The  slam bang version of the game people felt suited the younger generation better than the ones who were already established. TATA IPL over the years, time and again has dispelled this notion. One of the biggest myths that TATA IPL has done away with ever since its start is that so-called longer format players aren’t fit for this version of the game. The likes of Pujara and Vihari are an exception as they aren’t able to attract bidders at the auction table. But the likes of Dravid, Rahane have all had good success in this format of the game.

Making a case for himself in the shorter formats –

If one reads the name of Wriddhiman Saha, the 37 year old from Bengal is known for his latest run-in with BCCI and the controversy with journalist Boria Majumdar. There were whispers he might not be picked in the auction after he was dropped for the 2 match test series against Sri Lanka. But Gujarat took a punt and picked him and Saha has re-paid their faith by being a perfect replacement for Wade who has struggled so far with the bat. Saha has played 5 games this year scoring 154 and pouching 5 catches. Speaking to media the veteran stumper said “Don't know why some people say I'm not a shorter-format player. But on my part, I've always liked to play shorter formats since my early years. I may not be having the physique of Mahendra Singh Dhoni, Andre Russell or Chris Gayle. But the potential I have, I can make use of the Powerplay with my fearless attitude. And I've done that”

The pivotal moment of the season for Saha was the 68 he scored against SRH in a tense game at the Wankhede. He scored 68 runs from 38 balls as he took the attack to the strong SRH team. it seemed as if he was making a point to someone with plenty to prove, but Saha said “It's not about answering anyone. I just played for my team's cause as we had to chase down almost 200 (196) in that game. I could contribute to a solid start which my team needed then. That’s what matters ultimately. I don’t play to show or prove anything to anyone. Not sure if that knock is a turnaround or so, but yes, it has been a boost to my intensity, which I did feel in the matches thereafter”