Ravindra Jadeja suffers injury and gets ruled out of the IPL 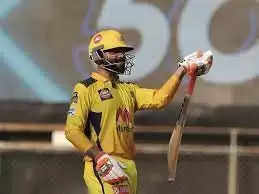 TATA IPL 2022 has seen amazing action on the field of play ever since it began on March 26. Now wth the tournament in its final stretch, it seems like even the off the field issues are catching steam. This season has been one to forget for the likes of Mumbai Indians and Chennai Super Kings, who have been below par in their performances. Earlier this week it was reported that Suryakumar Yadav was ruled out of the IPL due to an injury he suffered against Gujarat Titans. Now Yet another India player is set to be ruled out of the tournament putting his team in a spot of bother.

Jadeja slotted into the hot seat as the captain -

Ravindra Jadeja was given the captaincy of the side just 48 hours before CSK began the defence of their title against KKR. Dhoni decided to step down as the CSK captain and Jadeja was given charge of the team. it was a surprising move by the men in yellow as Jadeja did not have any captaincy experience.

Series of poor results and losing the captaincy -

Chennai Super Kings began the season poorly as they lost one game after the other and were at the bottom of the table along with Mumbai. This led to reports coming out that Jadeja had stepped down as the captain and MSD was given the charge of the team again . The loss of captaincy was explained by CSK as a bid by Jadeja to rediscover his form and continue to contribute as a player.

Slammed by experts and sly dig from Dhoni -

When Jadeja stepped down as the skipper of the team, there were lots of noises after the move. Several experts had slammed Jadeja for not actively taking charge of the team and it still looked as if MSD was running the team. Even Dhoni remaked that Jadeja had lot of time to prepare as he knew from the end of the last season about him being given the captaincy. It was a sly dig by MSD at Jadeja as if he was a rabbit caught in the headlight.  This wasnt helped by Ravi Shastri also question Jadeja recently when he said that Jadeja looked like "Fish Out of water tottally out of place"

Yesterday Jadeja had liked a tweet by Charu Sharma who had written about the captaincy changes at CSK. Earlier this morning Cricket Cult had broken the news of Ravindra Jadeja being unfollowed by the CSK team. If losing the captaincy wasnt enough then Jadeja was dropped by CSK in the last game against DC due to a mysterious injury.

Jadeja set to miss the IPL -

Now it can be confirmed that Jadeja is set to miss the last few games of the season for CSK after an unspecified injury has laid him low. There are no reports of what the injury could be, but the word coming out is, Jadeja wants to preserve himself and get fit in time for the South Africa series post the IPL.