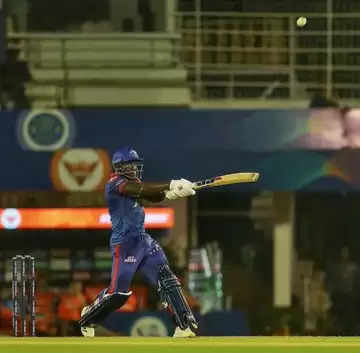 Rovman Powell has made a name of himself as one of the brutal hitters of the ball when he smashed a century against England in the T20 series. This helped him get picked for the IPL this year by the Delhi Capitals. Powell was the man who was batting when Obed McCoy bowled a full toss which he struck for a six and the entire no-ball controversy happened. He looked down and out when the match ended but on Thursday everything aligned for the 28 year old as he took SRH bowlers to the cleaners.

When the final over began, the eyes of the world was on Warner who was batting on 92 and the world wanted him to score a 100 against his former side for their pathetic treatment meted out to Warner. The ball was handed to Umran Malik who went onto create history in the over for the fastest ball bowled. But Powell was in a zone of his own as every ball went for a four or was hit into the plush clubhouse boxes for sixes at the CCI. Powell later revealed the mid-pitch conversation he had with Warner and said “I got winded at the end. I asked DW if I should get a single to allow his 100 but he told me, ‘that’s not how the game is played’, and told me to go big”

Rovman Powell came into bat at number 5 and took a while top get going. It was Warner who was doing the scoring and the West Indian seemed all at sea. But once he got his eye in there was no stopping Powell as the white ball was always seen flying into the night sky. Powell hit 6 sixes in his innings and played the best innings of his IPL career so far. speaking about the innings Powell said “Sometimes, I could not hit it as well as I wanted to, some of the swings were planned. The wicket was good, I planned and shaped up for the full and slower balls and the shots came off towards the end”

Showing self-belief in himself –

Powell before this game had played 9 games and scored 135 runs 8 innings he had batted and his best score was a 36 in the infamous game versus RR. This was his first 50 of the season and he went past 200 runs for the season with an average of 25. Powell walked up to Pant and had told him to try him at 5 as he was confident about his game against Spin. Powell said “I chatted with Rishabh about my batting position, I told him to trust me at 5 as my game against spin. I tried to get in for 15 balls and then accelerate in the next 20”