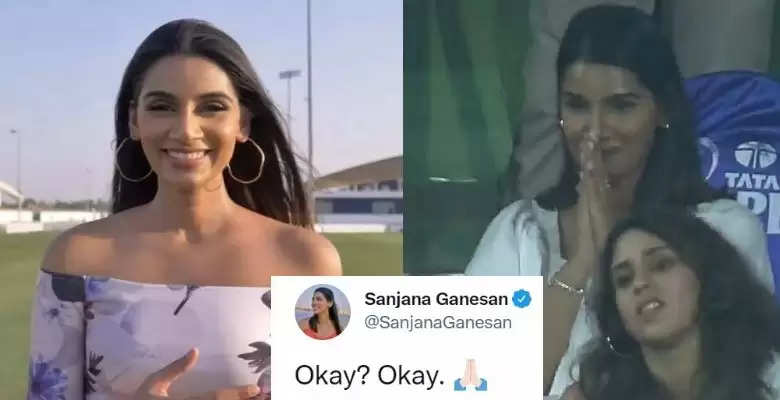 TATA IPL 2022 has been one bad season for Mumbai Indians team and its fans. The men in blue and gold finally won their first game of the season after their 9th attempt. Despite the win the MI team sits 10th in the table with a win and 8 losses from 9 games and nothing to play for this season. Mumbai got their first win on Saturday when they beat Rajasthan Royals at the DY Patil Stadium on the very day that Rohit Sharma the MI skipper turned 35.

Mumbai Indians were chasing 159 to win with Rohit Sharma and Ishan Kishan  the opening batters having added 23 for the first wicket. That’s when Birthday boy Rohit went for a sweep off Ashwin and was caught by Daryl Mitchell for 2. This got Rohit’s wife nearly to tears. We had previously shown how Prithi Narayanan the wife of Ashwin was quick to spot this and went and hugged Ritika. Now another video has come out where Sanjana Ganesan the wife of Jasprit Bumrah and cricket anchor was seen almost giggling with Ritika dejected in the foreground.

The video which has gone viral has seen fans give their opinions as all of them felt that Mrs. Bumrah was laughing at the wicket of Rohit Sharma. While every Mumbai fans is concerned and worried with the Hitman’s form, this video made every Mumbai and Indian supporter see red. Ganesan had to face a lot of ire on Twitter before she clarified her stand with a tweet which read “Things are seldom what they seem”

Mumbai hope to finish the season on a high –

Mumbai were already out of the reckoning for the play-off places after their lost their first 7 games in a row. The game on Saturday was their first win of the season, Mumbai now have 5 games to move up the table and finish in a decent position. Mumbai next play against Gujarat on Friday before a game against KKR next Sunday. 12th May will witness Mumbai lock horns with Chennai once again this season before they end their season with games against SRH and the final fixture against Delhi.