Star SRH player ruled out of the tournament and replacement named 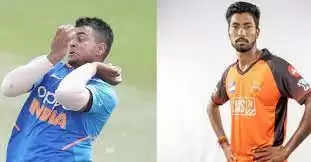 Sunrisers Hyderabad were the team to watch and beat when they were on a roll with consecutive wins on the bounce. The team led by Kane Williamson was applauded for their all round show as they were brilliant with the bat and ball. The men in orange though have had to undergo two back to back losses which now puts them in a spot of bother for the qualification for the final 4. SRH next face RCB on Sunday afternoon. Just ahead of the game the men in orange have been stuck a huge blow.

Sunrisers Hyderabad were hit with a huge blow when Saurabh Dubey who is a right arm medium pace bowler was injured. The 24 year old will now miss the rest of the season and has been replaced by Sushant Mishra. The SRH team management have confirmed this change. Mishra is a 21 year old left arm pacer from Jharkhand who can bowl at good speed and can generate good bounce. He was part of the under-19 squad which played the 2020 World Cup where the Indian team reached the finals. Mishra is a team mate of IPL players from the same batch which includes Yashasvi Jaiswal and Kartik Tyagi. He will be delighted to share the dressing room with Tyagi who is also part of the SRH team and played in the game against DC where he clocked 150 KPH.

Big run in of games coming for SRH –

SRH are currently 6th in table with 10 points from 10 games and will be looking to snap their two back to back losses. They next face RCB who have played a game more and have 12 points from 11 games. A loss to RCB on Sunday will give SRH another jolt in their bid to make the final 4. Post the game against RCB, SRH then play against KKR on 14th May and finish their league phase with games against Mumbai on 17th May and their last game against PBKS on Sunday 22nd may.