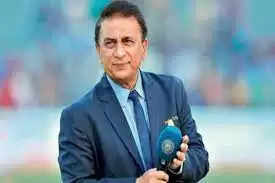 It’s official Chennai Super Kings are out of contention for a place in the play-offs for TATA IPL 2022. Chennai came into the game against Mumbai with a faint hope of reaching the final four. Mumbai bowlers though played the party spoilers as the already eliminated men in blue and gold took their arch rivals along with them. Post this loss a lot of fans are wondering if MSD will be playing the TATA IPL 2023 and former India batting maestro Sunil Gavaskar has had his say on the same.

Now that CSK are out of running for the qualification for play-offs in this year’s IPL, the eyes of the men in yellow fans will be on the season next year. There could be a few changes in the Chennai line up as this team might see a few players shuffled across and shipped. One of the big questions will be is this is the swansong for MS Dhoni who turns 41 this 7th July. Speaking to Star Sports India, former India batting stalwart Sunil Gavaskar said “well, I mean look at the way he has played, he is clearly showing he is very keen, still enthusiastic about the game. On the field, it was quite telling today. He was running from one end to the other end, which means he was keen. He senses an opportunity when those 2 or 3 early wickets fell. We have seen him do this regularly.

Dhoni began IPL 2022 by giving the fans a huge shock, he stepped down as the captain and handed over the baton to Jadeja. The left arm spin bowling all rounder though endured a miserable campaign as he saw CSK lose one game after the other. It was then decided that MS Dhoni will be given the charge of CSK once again. The performances improved but the men in yellow were so far off the 8 ball that they had to face an early exit. The big game against Mumbai on Thursday saw them get dismissed for 97 and despite striking some early blows the Mumbai Indians went on to win the game by 5 wickets and dump CSK out of the tournament.