Suryakumar Yadav posts an update about his fitness on social media 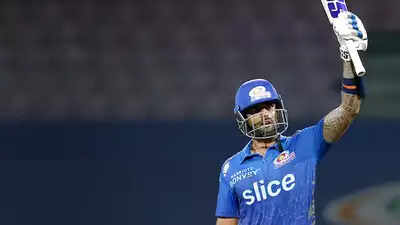 Mumbai Indians on Monday slumped to their 9th loss in the season to stay 10th in the table. The season has been one to forget for Mumbai Indians as they have erred not only on the field but also off the field. The form of the batsman has been a disappointment with the likes of Rohit Sharma and Kieron Pollard mis-firing. The loss to KKR meant that the Shreyas Iyer led side are still in the hunt for a place in the final four of the tournament with Mumbai already out.

Mumbai Indians who are already in the middle of their worst season in the IPL history were dealt with a big blow. Just minutes before the game the news came out that Suryakumar Yadav has been ruled out of the remainder of the IPL season due to an injury. The 31 year old along with Tilak Varma was the only positive for Mumbai Indians this season with the bat. Yadav had just returned from an injury which he sustained during the T20 series against West Indies earlier this year after playing in the 3 match T20 series.

Yadav posts an update on his fitness to the fans –

The 31 year old Mumbai batsman suffered a forearm injury during the game against Gujarat Titans at the Brabourne stadium. The exact time line of his return isn’t known at this moment, but the cricketer had a message for his fans on social media. Taking to twitter Yadav wrote “with all your wishes and support, I will be back in no time. To my Mumbai Indians family, I will be cheering for you from the other side, this time. Let’s finish the tournament on a high note and display our true character on the field”

With all your good wishes and support, I will be back in no time 😇

To my MI family, I will be cheering for you from the other side, this time. Let’s finish the tournament on a high note and display our true character on field. 💪 pic.twitter.com/WXfd2iwZIW

Surya Kumar Yadav has been one of the most consistent players for Mumbai Indians ever since he came back to the team in 2018. He was instrumental in Mumbai winning 2 back to back IPL titles in 2019 and 2020. This year he had scored 303 runs with a strike rate of just under 146. With a lot of international cricket in the anvil, the Indian fans will be hoping to see SKY in the pink of his health once again.