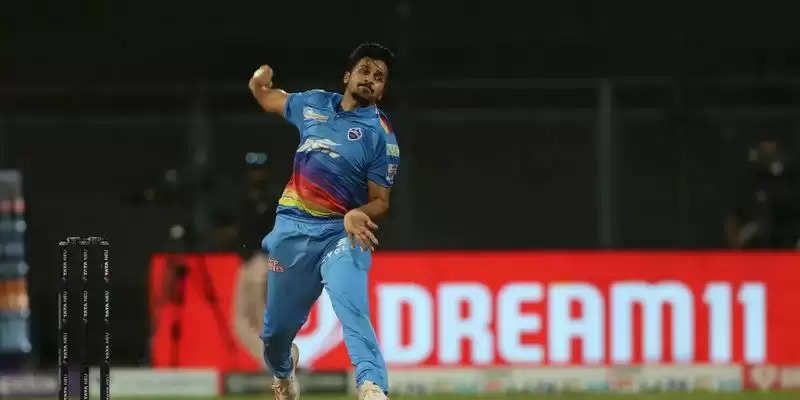 Thursday witnessed KKR and Delhi Capitals lock horns at the Wankhede Stadium with both teams in search of a win. KKR previously had lost 4 games in a row, while DC had lost to RR in a controversial game. A win for either side would keep them in the hunt for the final 4 places. Delhi Capitals came out trumps after they condemned KKR to their 5th loss in a row. The Capitals won the game by 4 wickets with an over to spare and register their 4th win of the season.

Shardul Thakur over the last year and half has been one of the best players for India away from home in the longest format of the game. The 30 year old all rounder from Mumbai who made a comeback to Delhi after few years in Chennai hasn’t really set the IPL on fire. Yesterday against KKR, Thakur bowled one of the most atrocious deliveries seen ever in the IPL. Thakur was trying to bowl the knuckle-ball variation till he saw the ball slip out and land behind. This got a chuckle out of the Delhi players and sent the fans into a tizzy.

Put into bat, KKR went in with 2 debutants in Baba Indrajit who kept wickets and Harshit Rana a 20 year old seamer from Delhi. Delhi too made a change giving Chetan Sakariya his debut game who went on to remove Aaron Finch in the 1st over. It was Kuldeep Yadav’s day right from the start. The former KKR bowler came back to haunt his former team with yet another 4 wicket haul from his 3 overs while giving away just 14 runs. He got the wickets of Indrajith and Narine of consecutive balls, before getting rid of KKR captain Shreyas Iyer for 42 and dangerous Russell for a duck.

Delhi coast to an easy win –

Chasing a mere 147 to win, DC lost Shaw off the very 1st ball to a tumbling return catch by Umesh Yadav. Mitchell Marsh came into the side and showed his aggressive intent before he became Rana’s 1st IPL wicket. It was then a 65 run stand between Warner and Lalit Yadav that steadied the ship. Warner was out for 42, while Yadav was out for 22 as DC had a mini collapse. At 84 for 5, KKR were back into the contest, that’s when Powell and Axar Patel stitched a crucial 29 run stand, before the pair of Powell and Thakur saw the team home without further hiccups.

Coming back to Shardul Thakur, the 30 year old was the butt of all jokes as he was royally trolled by the cricket fans on twitter. They put out funny tweets to have fun at Thakur’s expense.

Lord Shardul bowling in opposite direction to get the wicket of batter sitting in dressing room. Lord for a reason 🙏