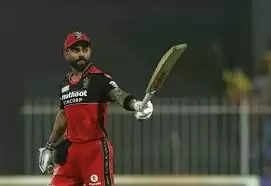 Virat Kohli is one of the rare IPL players who has been part of the same team since the start of the league. IPL 2008 auctions saw Delhi Capitals pick Pradeep Sangwan instead of their hometown hero in Kohli. It was the then Vijay Mallya led RCB that managed to pick the future Indian captain who also went to captain the RCB franchise. Apart from MS Dhoni and Sachin Tendulkar there are very few players who have played for one IPL franchise. Virat Kohli has come out and made a startling revelation about his association with RCB.

Kohli reveals he was approached by various franchise –

Virat Kohli may be struggling for form now, but there is no denying his class with the bat and what he has done for Indian and world cricket in general. Kohli hasn’t scored a century since 2019 but the world still hopes and yearns for Kohli to get back to his best. Kohli is also known for his loyalty to RCB and has been with them since 2008. Speaking to the official RCB show RCB inside the former skipper revealed how he was approached by various teams to be part of the auction. Kohli said “To be very honest I thought about it. Yes, I won’t shy away from it and I have been approached many times as well to come into the auction somehow, put my name there and stuff. It’s like if you are a good person, people like you, if you’re a bad guy, they just stay away from you and eventually that’s what life is all about”

Kohli on what RCB means to him –

Kohli has been the pin-up boy for RCB for a while now. His 973 runs in the 2016 season is still a record, as he scored 4 centuries that season. Kohli helped RCB reach the final before they lost to SRH in the Final. RCB in all have reached the finals thrice in 2009, 2011 and 2016 but haven’t been able to win the title so far. Kohli, though holds RCB close to his heart when he said “For me the understanding that the loyalty with RCB like how I follow my life is far greater for me than the fact that five people in the room will say oh finally you win the IPL with whoever xyz. You feel good for five minutes but then sixth minute you could be miserable with some other issues in the life. So it is not the end of the world for me, What this franchise has given me in terms of opportunities in the first three years and believed in me that is the most special thing because as I said there are many teams who had the opportunity, but they didn’t back me, they didn’t believe in me”