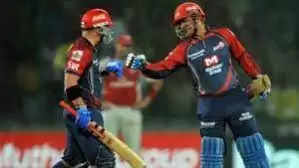 David Warner was a phenomenon who broke into world cricket in 2009. This was a Australian player who was drafted into the senior side despite not playing any first clas match for New South Wales. The then 22 year old was called up for his debut in a T20 against South Africa and Warner showed his class with 89 from 43 balls with 7 fours and a six. Warner made his First class debut few months later, interestingly he had already played domestic ODI and T20 making his debut in 2007. Warner was picked by then Delhi Daredevils franchise for the IPL 2009 edition which was to be held in South Africa.

David Warner now is a fun loving guy off the field who makes short videos with his wife and children. They can be seen crooning and dancing to songs especially the Telegu songs as Warner is a huge name in the Hyderabad region for his feats with the SRH team including winning the IPL for them in 2016. Former Delhi captain and Indian legend Virender Sehwag though has come out and spoken about the early days of Warner in the Delhi camp and how he was sent back home to due issues pertaining to discipline. The former India player while speaking to Cribuzz said “I too have vented out my frustrations on a couple of players and David Warner was one of them. Because when he had joined newly, he partied more than believing in practice or playing matches. In the first year, he had a fight with a few players so we sent him back for the last two matches. So sometimes it happens that you keep someone out to teach them a lesson. He was new so it was important to show him that you alone are not important for the team, others are too. There are other players who can play and win the match for the team too. And that's what happened. We kept him out of the team and won as well”

Warner’s off field issues in the past -

During the 2013 Champions Trophy tournament, Warner got into trouble when he punched Joe Root in the nightclub. This happened after Root was alleged to have made some gestures where it seemed Root was mocking Hashim Amla. The entire incident is still mysterious and one cannot know what happened because both the parties haven’t spoken about it. Warner was then involved in the in-famous Sandpaper saga when he along with Steve Smith and Cameron Bancroft were caught changing the condition of a ball during the cape town test in 2018.

This earned Warner and Smith a year long ban as Bancroft was hit with a six month ban severe fines. Warner at that point was as per reports someone who had got alienated from his own team mates. Warner who was then 31 years old made a tearful address to the Australian public and served his year long ban. Once he came back to cricket he was a different player as the snarls and groans were gone and he had become the model professional. Warner started scoring runs by the dozens and winning games for his country again. He came back to the IPL and picked up from where he left off.

The eyes of the world on Thursday was on Delhi Capitals and Sunrisers Hyderabad game. It had a lot more riding on it than just 2 points as it was for the first time David Warner was set to lock horns with his former side. Warner was stripped of his captaincy mid-season and was seen to be in tears when he was sitting on the side-lines as he was comforted by a fellow SRH player. Before the end of last season he put out a emotional story on Instagram as he was ready to walk away from SRH. Warner was picked by Delhi in a strange events at play as he came back to the place where he began his IPL career. It was a mellowed down Warner who put his head down and scored a brilliant 92 to help Delhi win against his former side.