Watch! Anushka Sharma’s reaction as Kohli scores his first half century of the season 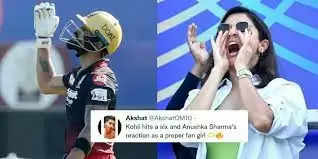 Saturday was the day every RCB fan and every cricket fan in general was waiting for. The place was the Brabourne stadium and the opponents were Gujarat Titans. The eyes of the world was on one man as Virat Kohli took his guard. This was a batsman who has bought so much joy to the fans around the world with his batting. The fans cannot believe their eyes as the best batsman in the world is struggling for runs with a mere 128 runs from the 8 games he had played before the game against the Titans. Kohli had scored a mere 9 runs with 2 first ball ducks added to his kitty.

Happy Wife and Happy Fans as Kohli scores a 50 –

Something was different when Kohli took guard while facing Mohammad Shami on Saturday. The first scoring shot was a drive down the ground for a crisply timed four and the very next ball was a vintage clip of his pads for another 4. The next shot was a pushed touch and off the blocks for a single. These 3 shots showed that Kohli was back in his elements as he was showing signs of life with the bat. The former India and RCB captain then scored his maiden 50 much to the relief of his team mates and the fans around the world. The cameras then panned to his wife superstar Bollywood actress Anushka Sharma who was seen cheering the loudest. Kohli scored 58, as he was ably supported by Rajat Patidar who scored 52, Glenn Maxwell swung his bat around to score a quick 33 to help RCB post 170 on the board.

Chasing 171 to win, Titans got a good start as Saha and Gill added 51 for the 1st wicket. Saha fell for 29 off 22 when he was caught by Patidar of Hasaranga. Saha hit 4 fours in his knock, Gill was the next to go for 31 off 28 with 3 fours and a six as he fell LBW to Shahbaz Ahmed. When Sai Sudharshan fell for 20 the score was read 95 for 4, with GT still needing 76 runs from 43 balls. That’s when Rahul Tewatia came to the wicket and joined David Miller. The two left handers went after the RCB bowlers and added 79 for the 5th wicket to win the game by 6 wickets with 3 balls to spare. Tewatia was not out on 43 off 25 with 5 fours and 2 sixes, while Miller was not out on 39 off 24 balls with 4 fours and a six. This win kept GT at the Top while RCB stayed in 5th.