Watch! Bad display of sportsman spirit by RCB after loss to Rajasthan Royals 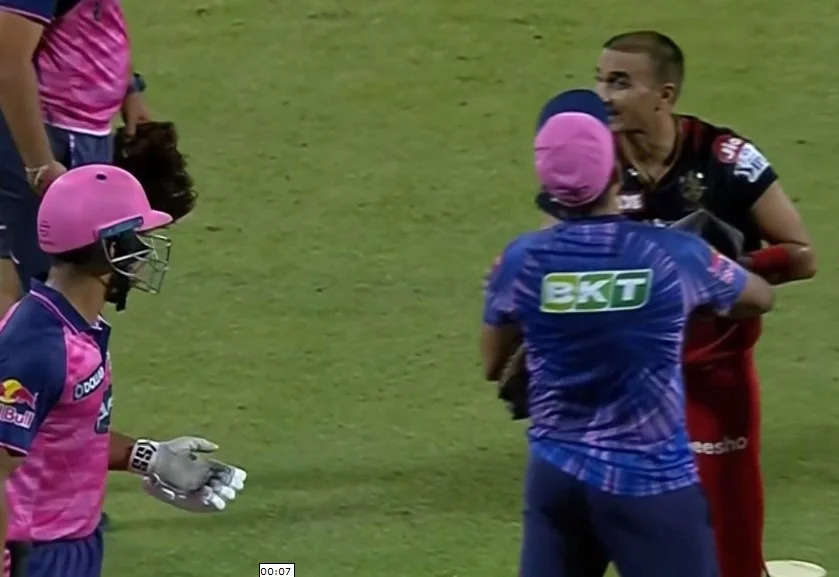 Rajasthan Royals on Tuesday won against Royal Challengers Bangalore to go top of the table after winning the game by 29 runs. It was a day to remember for the men in pink as they played out of their skins with the bat and ball. The game was electric not only for the performances with the bat and ball but also for the confrontations that were seen on the pitch. It was a day to forget for Harshal Patel and RCB as they showed their worst behavior on the field.

It was a frustrating day for Faf Du Plessis as he witnessed his side go down by 29 runs and lose a chance to go top two in the table. The end of first half saw Harshal Patel and Riyan Parag get involved in a massive confrontation. After the game ended and as luck would have it, it was Harshal Patel who was last man out. Patel was caught by Riyan Parag off the bowling of Kuldeep Sen. The youngster tried to shake Patel’s hands who just ignored it and went past him.

Day to remember for Riyan Parag-

Riyan Parag was the man of the moment yesterday as he played an amazing innings. The youngster scored 56 runs to help RR reach 144 after the men in pink had issues with their batting for the first time. Parag wasn’t done after his sparkling 50 with the bat, he grabbed the key catch of Virat Kohli for 9. In fact Parag ended up taking 4 catches on Tuesday to make it a memorable evening at the MCA stadium at Pune.

Chasing 145 to win, fast bowler Kuldeep Sen wrecked havoc as he cut through the RCB batting with figures of 4/20 from 3.3 overs. The 25 year old from MP got the wickets of DU Plessis and Maxwell of back to back deliveries. He then came back to get the scalps of Hasaranga and last man Harshal Patel. This was his best figures so far in the IPL and Sen bowled with a lot of pace with one of his deliveries clocking 147 KPH.