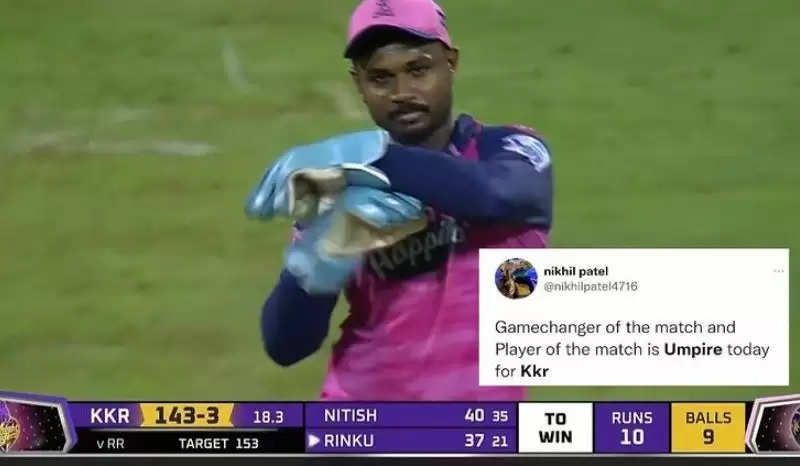 Kolkata Knight Riders took on Rajasthan Royals in the game on Monday at the famed Wankhede Stadium. Shreyas Iyer and his team snapped their losing run after they won the game by 7 wickets with 5 balls to go. The match was going pretty well till it was the final few overs of the KKR innings when the spate of bad umpiring struck again. The first signs of bad umpiring was seen during the Delhi versus RR game. Rovman Powell and DC were denied a no-ball which caused Pant to call back his players.

The Indian Premier league is the biggest domestic T20 league in the world. The umpiring over the last few games has been so abysmal that it is bringing the brand value of the league down and putting a huge blot over. The first incident happened in the 17th over’s 3rd ball. Prasidh Krishna bowled one outside off stump wide when he saw Rinku Singh make room outside off and followed him. The umpire called it a wide much to the dismay of the bowler and the captain Sanju Samson.


The nine ball over –

If the 17th over wide was shocking, then it was just a teaser as the whole incident was yet to play out. The 4th ball off the 19th over saw Krishna bowl a short ball to Singh who tried to upper cut it and missed the shot. The umpire called it a wide and the captain Sanju Samson had lost his plot. He went for the DRS but the umpire at first wasn’t going up for the review. The KKR players had their exchange with Samson and finally it was decided that the DRS was for a caught behind. As they say “desperate times call for desperate measures” The decision came back not out and the wide ball decision stayed. There was more drama when the last ball off the 19th over saw Nitish Rana get followed by Krishna and the ball and batsman were near each other outside the pitch and the batsmen ran single as well as the wide being given. None of the RR players could understand what was happening.

The first ball of the final over saw Rana hit Kuldeep Sen for a upper cut to win the game and condemn RR to their 2nd consecutive loss.