Watch! Dinesh Karthik stuns the cricketing fraternity with his gamesmanship against PBKS 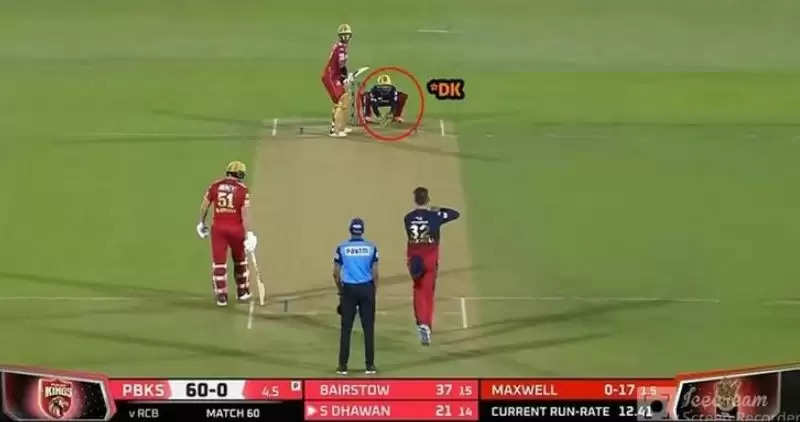 Match 60 on Friday between Punjab Kings and Royal Challengers Bangalore was a one sided affair which no one saw coming. The Mayank Agarwal led side beat the Bangalore side by 54 runs to keep their play-offs hopes alive. RCB came into the game with 2 back to back wins which had taken them to 4th. PBKS on the other hand had been inconsistent with a win in one game and loss in the other. PBKS came into the game with 10 points from 11 games and were looking for a win.

Dinesh Karthik has been one of the standout players for RCB this year, be it behind the stumps or with the bat. The veteran wicket keeper is also known for his smart mind and doesn’t shy away from a chat behind the stumps. PBKS got off the blocks with both Dhawan and Bairstow going off like a bullet. The incident happened in the 5th over as Maxwell was greeted to the crease with a six by Dhawan of the first ball. The final ball of the over saw Dhawan look for a slog sweep and he was bowled by Maxwell. The left hander had scored 21 off 15 balls with 2 fours and a six. Interestingly Dinesh Karthik had already predicted it much before and had a word with Maxwell about it. DK knows Dhawan well and both are good friends right from their under-19 days for India.

Jonny Bairstow with 66 and Liam Livingstone with 70 helped PBKS reach 209 for 9 on the board. Chasing 210 to win, RCB were never in the hunt as they lost wickets at regular intervals. Virat Kohli was first out for 20 and he looked up at the sky in total desperation looking for divine intervention. Du Plessis and Lomror then fell in quick succession to have RCB at 40 for 3. Maxwell and Patidar tried to rebuild the innings with a stand of 64 runs. Patidar was out for 26 and he was soon followed by Maxwell who was out for 35. Dinesh Karthik for once couldn’t do his rescue act with the bat as he was dismissed for 11. With DK gone, the RCB’s hopes disappeared and that was the end of the game. PBKS ran out winners by 54 runs and moved to 6th in the table. Kagiso Rabada with 3/21 was the best bowler on display for PBKS.

RCB now have played 13 games with 14 points and are in the 4th place, but their run-rate has taken a beating post the loss. Punjab are in 6th place with 12 games and 12 points and their run-rate has moved into the positive. RCB play their last game against Gujarat on Thursday, 14th May. PBKS on the other hand play fellow final 4 contenders in their last 2 games. Punjab first lock horns with Delhi on Monday 16th May, followed by a game against SRH in the final league game of the season on Sunday 22nd May.