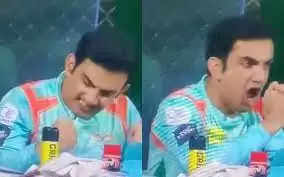 Delhi Capitals and Rishabh Pant cut a frustrated figure at the end of the game on Sunday at Wankhede Stadium. Delhi Capitals lost yet another game to have their chances to enter the play-offs take another hit. Lucknow Super Giants won the game by 6 to move to 2nd in table with 14 points after having played 10 games as IPL moves into the business end of the tournament. One man who was seen happy with the result was former India, KKR and Delhi player and captain Gautam Gambhir who is the mentor for the LSG franchise.

Gautam Gambhir during his playing days was known to wear his heart on his sleeve. The former Indian opener and world cup winner who is with the LSG team as a mentor was caught by live TV blurting out expletives. The moment happened after LSG won the game by 6 runs to move 2nd. There were celebrations and back-slapping as the LSG franchise are now one step closer to the final 4.

Winning the toss on Sunday, KL Rahul elected to bat first and the 30 year old continued to show his good form with the bat. De Kock and Rahul added 42 for the 1st wicket before De Kock was out for 23 falling to Shardul Thakur caught by Lalit Yadav. It was the 95 run stand between Rahul and Hooda which took the game away from Delhi. Hood was out for 52 caught and bowled by Thakur with 6 fours and a six to his name. Rahul was moving along well and it seemed he will score his 3rd ton of the season when he became Thakur’s 3rd wicket. Rahul fell for 77 from 51 balls with 4 fours and 5 sixes as LSG scored 195.

Mohsin Khan stars with the ball –

Chasing 196 to win, DC lost Shaw early when he was out for 5, David Warner was out cheaply for 3 to leave DC at 13 for 2. That’s when Pant and Marsh added 60 runs in quick to put LSG bowlers on the backfoot. Marsh was out for 37 off 20 balls with 3 fours and 3 sixes. It was then steady procession of wickets as wickets kept on falling. The final nail in the coffin came when Pant was out for 44 off 30 balls with 7 fours and a six bowled by Mohsin Khan. Despite some lusty hitting by Rovman Powell (35) and Axar Patel (42*) DC fell short by 6 runs.Khan picked up 4 wickets in the game to register his best bowling figures in the IPL.