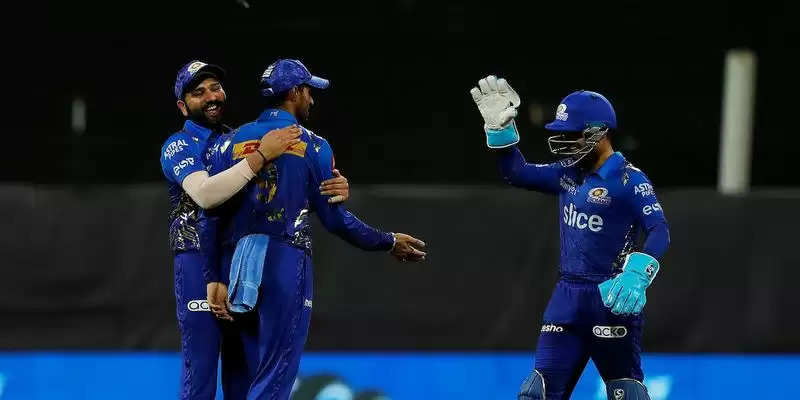 Mumbai Indians teams and its fans were a happy bunch after the end of the game against Chennai Super Kings. The men in blue and gold won the game by 5 wickets with 31 balls to go to dump CSK out of the TATA IPL 2022. The win over CSK gave MI its 3rd win of the season and got them to 6 points which puts them 2 points behind CSK who are in 9th place. Rohit Sharma is a happy captain as he is team is taking shape ahead of the next season of TATA IPL.

Mukesh Chaudhary walked into bat when CSK were 81 for 9 and it was left to MS Dhoni to take CSK to a good total on the board. The 40 year old CSK captain was showing his vintage form with the bat. It was the final ball of the 16th over which was bowled by Riley Meredith. The Australian bowled a bouncer under which MSD ducked and ran to steal a quick single. Mumbai’s wicket keeper Ishan Kishan who had removed his right hand glove threw the stumps down with ease. Mukesh Chaudhary was run out for 4 to end CSK’s innings at 97.

MS Dhoni cut a angry figure as the CSK batting let him down in the one game he wanted to win the most. A win over Mumbai would have put CSK in the 6th place and given them  their 4th win of the season. The captain was not out on 36 as he showed his vintage form with the bat. MSD walked into bat with CSK in a huge spot of bother after losing early wickets with half the side gone with the score reading 29 on the board. He added 39 along with Bravo for the 7th wicket but then there was another slide which saw CSK lose their last 4 wickets for a mere 19 runs against a disciplined Mumbai Indians bowling unit.

Despite being the sole warrior for his team, the CSK captain was called out by angry fans on Twitter. The cricket fans minced no words when speaking about the dismal show by CSK.