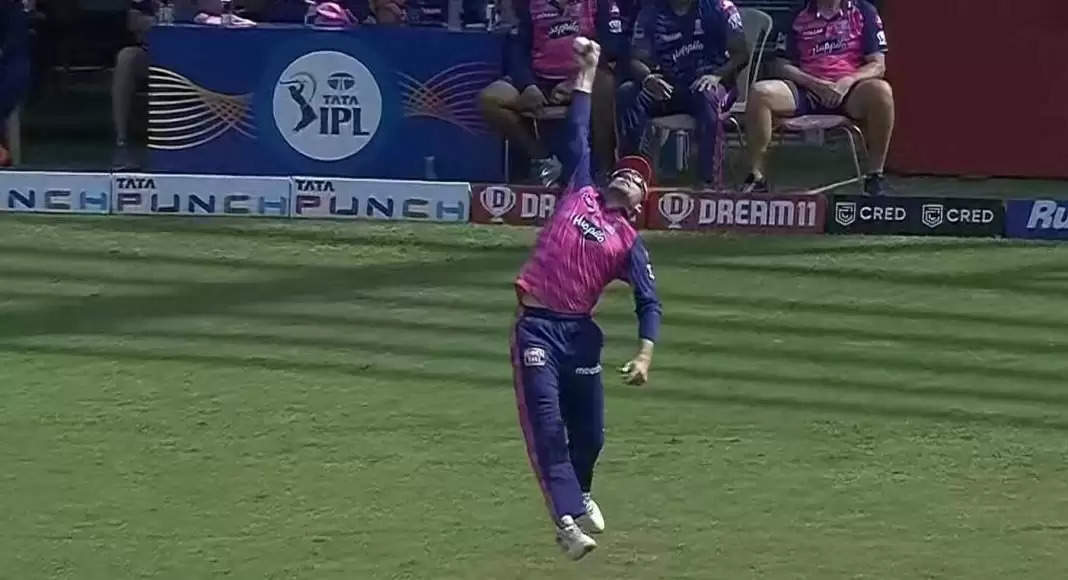 Wankhede Stadium is playing host to the 52nd match of TATA IPL 2022 between Punjab Kings and Rajasthan Royals. It is an important game for both the sides as a win for RR will push them to number 2 in the table for a while. A win for PBKS will get them within touching distance of the top 4 as they will move to number 5 in the table. PBKS won the toss and chose to bat first going unchanged, while Jaiswal came into the side for RR replacing Karun Nair.

Jos Buttler stuns the Mumbai crowd with his one handed catch –

Batting first, Jonny Bairstow and Shikhar Dhawan opened the innings for PBKS. The two players started in contrasting styles as Bairstow was going after the bowlers, while Dhawan was sedate in his approach. The moment of the game came Ashwin bowled the first ball of the 6th over. Dhawan came down the track to loft the off spinner but the left hander was stunned when Buttler jumped to pouch the catch with his right hand. It seemed like a NBA player blocking a shot from going into the net. Dhawan was out for 12 off 16 balls with 2 fours to his name after having added 47 for the 1st wicket.

The loss of Dhawan did not deter Bairstow as he went after the bowlers and scored a brilliant half century. Rajapaksa came out and went after the RR bowlers right from the word go before falling to Chahal for 27 off 18 balls with 2 fours and 2 sixes. Agarwal batting at number 4 tried to up the tempo before he became Chahal’s 2nd wicket caught by Buttler for 15. One run and 2 balls later Bairstow was out LBW to become Chahal’s 3rd wicket as the leg spinner went past 20 wickets for the season. Jitesh Sharma and Liam Livingstone added 50 runs for the 5th wicket from just 25 balls as both the batters sent the bowlers on a leather hunt. Livingstone was out for 22 off 14 with 1 four and 2 sixes. Jitesh Sharma was not out on 38 off just 18 balls with 4 fours and 2 sixes as Rishi Dhawan was not out on 5 off 2 to help PBKS reach 189 on the board.