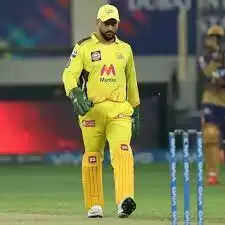 TATA IPL 2022 hasn’t really gone to plan for the defending champions Chennai Super Kings. The 4 time champs are 9th in the table and have had a disastrous campaign along with Mumbai Indians so far. MS Dhoni shocked the world before thew start of IPL when he stepped down as the skipper and gave the charge to Ravindra Jadeja. Since then MS Dhoni has played his cricket in a free manner even showing glimpses of his old self with the bat. The former India and CSK captain doesn’t appear much either on social media or any interview platform but when he does he shows of his funny side.

Dwayne Bravo shares a special bond with Chennai ever since his move down south in 2011. Bravo began his IPL career with Mumbai and played for the men in blue and gold for 3 years before donning the yellow of Chennai. The official Instagram handle of Chennai Super recently posted a chat with 3 of its members. The chat was joined by Dhoni, Bravo and opener Ruturaj Gaikwad. Dhoni while referring to a picture of himself and Bravo said “Bravo said my mind wasn’t working, which is half the time” . This got a huge chuckle out of Bravo. MSD also poked fun at Gaikwad when his pictures came up on the screen. The talk again moved to Bravo when MSD said “More often than not I tell him to bowl whatever you want, but don’t bowl this variation. This is when Bravo gets hit and I am thinking should I give him the gloves and start bowling because I can’t really bowl worse than that”

Chennai on the brink of elimination –

Chennai Super Kings next face off against Sunrisers Hyderabad and a loss to the men in orange will put CSK out of the tournament. CSK have just won two games in the IPL so far, with RCB and the disastrous Mumbai being the only games they have won. CSK have been hampered with the absence of Deepak Chahar who suffered an injury during India duties. Chennai and its fans are on the brink of missing the play-offs for the 2nd time in their history after they failed to qualify in the 2020 edition.