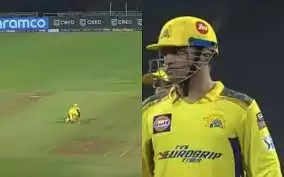 It seems the change of captaincy at Chennai Super Kings has really worked wonders for the defending champs. IPL 2022 was going pretty rough for the four time champs when Ravindra Jadeja took over the captaincy just 2 days before the start of the season. With CSK stuck in 9th, Jadeja decided to give up his captaincy and hand it back to MS Dhoni. Since MSD took charge he has fueled new life into the CSK outfit and he has made them a dominant force once again, which was evident with a huge win over Delhi on Sunday.

Delhi were in huge spot of bother at 109 for 8 and there was no chance the Rishabh Pant led side could win the game from there. That’s when Anrich Nortje tried to cut a ball from Theekshana which was fielded by Bravo. Dhoni was heard on the stump mic saying “Well done Oldman”. This drew a giggle from the commentators.

MSD was in his usual elements as he was looking to score big towards the end of the innings. A flurry of wickets meant that Bravo came out to bat, the West Indian hasn’t had a great deal to do this year as far as batting is concerned. Speaking at the post game interaction, Bravo said he had asked MSD to look for the boundaries and save him from running. Bravo said “Well, for me it was a hat-trick ball. I wanted to make sure I get him on strike. I told him to hit boundaries, not push me for twos. I told him after the innings ‘MS, 3 balls to again (if such a situation comes again), let someone else go and run because I have to protect my hamstring. But if felt good to be batting with a great. I thought it was a great professional team display, it started with Rutu and Conway. The way they set up the game with their batting (Was good) and then we finished off with the ball as well. Every game we play, we have to play like professionals and look to dominate”

Batting first, Ruturaj Gaikwad and Devon Conway went after the DC bowlers like a freight train. Both the batsmen ensured CSK were scoring 10 runs per over right from the start. The duo added 110 for the first wicket before Gaikwad fell for 41 off 27 balls. Dube was elevated to 3 and he used the long handle to score 32 off 19 balls to add 59 with Conway. It was the Kiwi who was the 2nd wicket to fall as he scored 87 off 49 balls with 7 fours and 5 sixes. MSD was not out on 21 off 8 balls to help CSK reach 208. Nortje picked e3 wickets while Khaleel took 2.

Chasing 209 to win the DC batters were never allowed to settle by the CSK bowlers as they took wickets at regular intervals. Marsh (25), Pant (21), Warner (19) and Thakur with 24 towards the back end of the innings were the top scorers. For CSK it was Moeen Ali with 3 wickets as Theekshana picked 1 wicket, while Bravo, Chaudhary and Singh picked 2 wickets each to give CSK a 91 run win over DC and move up to 8th in table.