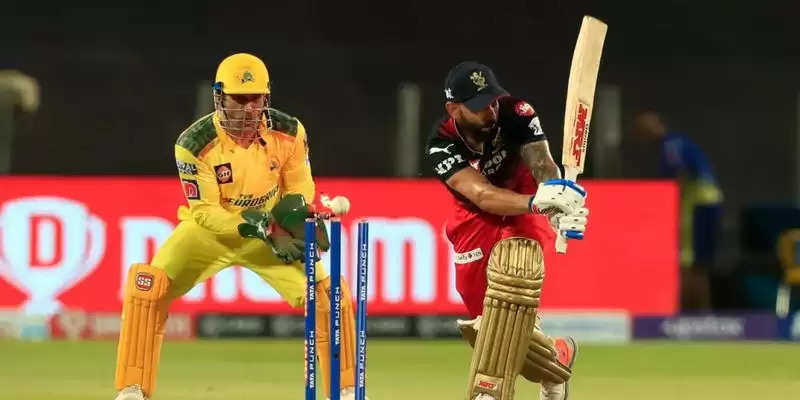 It is the 49th game of the TATA IPL and the game between RCB and CSK carries a lot of weight. RCB come into the game finding themselves 6th in the table with 3 losses in a row. These losses have put them in the peril of losing out on a chance to make it to the final four and make it to the play-off. CSK too are looking for a win as they find themselves in the 9th place and a loss will all but put them out of the reckoning for a place in the play-off. CSK won the toss and chose to bowl first and made just one change with fit again Moeen Ali coming in for Santner.

The mix-up between Kohli and Maxwell –

Kohli and Du Plessis opened the innings again for RCB and the duo put on 62 runs for the first wicket. The RCB captain was the first to go when he was caught by Jadeja off Ali for 38 off 22 balls with 4 fours and a six. Maxwell was elevated to number 3 with Kohli looking in good form. It was the last ball of the ninth over when Kohli looking for a quick single saw a hesitation between the wickets before seeing Maxwell get run out by Uthappa who lobbed the ball to Dhoni who effected an easy run-out as the Australian was dismissed for run a ball 3. From 62 for no loss RCB were 76 for 2.

Did Kohli lose his wicket due to lapse in concentration –

Post the run out of Maxwell there was a strategic time out break, post the break Dhoni was quick to bring Ali into the attack. Moeen has had a good record while bowling to Kohli and that continued when the offspinner saw Kohli miss a drive to take the top of his stumps. The former RCB skipper was out for 30 off 33 balls to have RCB reeling at 79 for 3 and one could tell that the run-out of Maxwell was playing on his mind.

Mahipal Lomror and Rajat Patidar then combined to add 44 for the 4th wicket before Patidar fell for 21 off 15, Lomror and Karthik added 32 quick runs before the young left handed batter was out for 42 off 27 balls. His innings included 3 fours and 2 sixes, Karthik was not out on 26 off 17 balls with one four and 2 sixes as RCB reached 173 on the board. For CSK it was Theekshana who picked 3 wickets, while Ali got 2 and Pretorious got one wicket.

Once Maxwell was out, the cricket fans were quick to take to twitter and show their frustrations towards the former India and RCB captain. The run out of Maxwell was perhaps the gamechanger according to many fans which turned the tide towards CSK after a good start.

Wow, Glen Maxwell is not faster than "Swiggy", he was run out , he is too slow pic.twitter.com/Fqe5ZVBb7Y

Dear @Gmaxi_32 you come to our team next year. you need Dhoni mentorship.. #CSKvRCB