Watch! Muttiah Muralitharan lose his cool as Gujarat Titans comeback from the dead to beat SRH 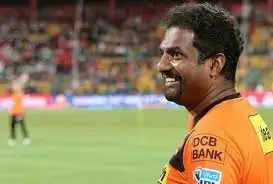 The 40th match of the Indian Premier league between SRH and Gujarat Titans was one for the ages. The excitement seen till the last ball as the Titans won by 5 wickets to go top of the table. The game at Wankhede swung from one extreme to another as the performances with the bat and ball was superb from both the sides. In the end Rashid Khan was the man who made the difference as he came back to haunt his former team big time to snap their run of 5 back to back wins on the trot.

Muralitharan loses his cool at Jansen –

When Marco Jansen got hold of the ball GT still needed 22 runs of 6 balls. The match was tentatively poised. That’s when Tewatia hit the 1st ball for six and took a run of the next ball, it was not 15 off 4. Rashid was on strike and the 3rd ball went for a huge six, the equation was now 9 off 3. The next ball was a dot ball to make it 9 off 2, that’s when Jansen bowled a full toss and the ball went for six. This got Muralitharan to be very furious as he was seen mouthing some expletives. The last ball went for another six to give GT a famous win.

Put into bat SRH began with Williamson and Abhishek Sharma. The SRH captain was out for 5 bowled by Shami. Tripathi was next to go for 16 LBW to Shami. Then Markram and Sharma added 96 for the 3rd wicket. Sharma fell for 65 off 42 balls while Markram scored 56 off 40 balls to help SRH reach 195 on the board.

Chasing 196 to win, the Titans were rocked by the pace of Malik who picked 5 for 25 to get his 1st fifer. Saha scored 68 off 38 balls with the help of 11 fours and a six. It was the pair of Tewatia and Khan who added 59 runs that swung the game towards the titans. Tewatia was not out for 40 from 21 while Khan scored 31 off 11.