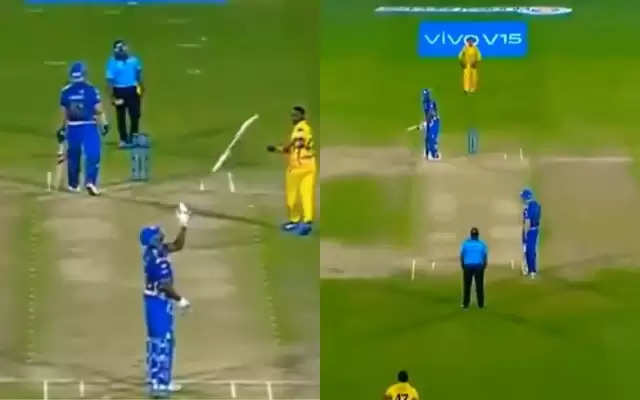 The controversy that was seen during the Delhi Capitals versus Rajasthan Royals is still not dying down. The entire cricket world is split on the events which transpired at the Wankhede Stadium. There has been a lot of questions being asked about the officiating and umpire Nitin Menon has been at the receiving end of the criticism that has come his way. Nitin Menon was the one who decided against calling the ball to Powell as no ball and this earned him the ire of the Delhi Capitals players.

When Pollard protested against Nitin Menon –

Post the entire controversy yesterday with Nitin Menon at the center of all the controversy., an old video has emerged of Kieron Pollard and Nitin Menon. The video is from an old game between Mumbai Indians and Chennai super kings. Kieron Pollard was on strike and Nitin Menon did not give Mumbai a wide ball. The bowler was Dwayne Bravo and the ball looked outside the tram line. Pollard threw his bat up in frustration and what happened next ball was very funny. Pollard moved way outside off as Bravo began his run-up. The burly batter from Trinidad then moved outside the pitch to register his protest again.

Indian Premier League is the best domestic T20 league in the world. Despite this billing the league has seen the umpiring standards hit an all time low. There will be questions asked about Nitin Menon who has recently been part of the ICC elite level umpires. The fans and experts have asked about the officiating that has been witnessed so far in the league. There was a lot riding and on the line for DC yesterday as they began the day at 6th in table. With that loss the Pant led side will now have to play out of their skins to make it to the final 4. The frustration from Pant was building up for a long time as he saw his bowlers lose their focus and discipline to allow RR score a massive 222 on the board.