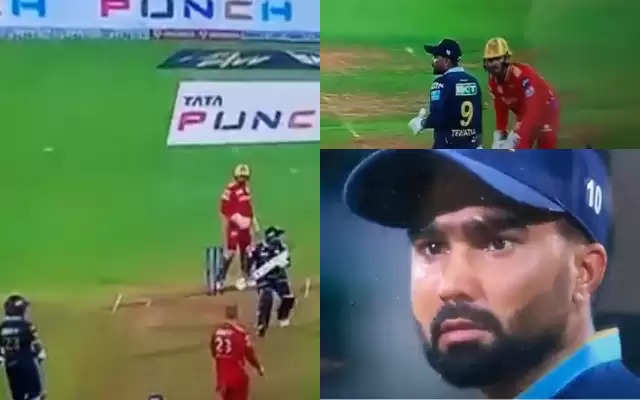 Rahul Tewatia has really grown as a cricketer since the knock for RR against Punjab in IPL 2020. The game at Sharjah where he hit Sheldon Cottrell for 5 sixes in 5 balls was the changing point for him. The left handed batsman and right arm leg spinner from Haryana turns 29 this 20th May, but his exploits with the bat has won him fans and propelled him to the footsteps of a national call up. This year Tewatia has been one of the key players for Gujarat Titans and Hardik Pandya with his finishing with the bat.

For the first time this season Rahul Tewatia wasn’t given the freedom to score quick as the PBKS bowlers were keeping their lengths tight. The free scoring GT team were finding runs hard to come by at the DY Patil stadium on Tuesday. Tewatia hit a ball to the off-side and was looking for a quick run but was denied by his partner. Sai Sudarshan who was playing the sheet-anchor’s role was given a stare and some words by Tewatia who looked to have lost his cool on his younger partner.

Loss to PBKS delays qualification for the Titans –

The loss on Tuesday to PBKS meant that Gujarat Titans will have to wait for few more days to qualify for the final 4. GT scored a mere 143 with Sai Sudarshan scoring an unbeaten half century. Chasing 144 to win, PBKS opened with Bairstow and Dhawan. The Englishman was out quickly but Bhanuka Rajapaksa and Shikhar Dhawan went about tearing the GT bowlers with their brute strength. Rajapaksa was out for 40, but this got Liam Livingstone who took just a single over to finish the game with a 28 run carnage off Shami. PBKS won the game by 8 wickets with 4 overs to go as they climbed to 5th in table.