Watch! Rashid Khan pulls of an absolute blinder to send Glenn Maxwell back to the hut 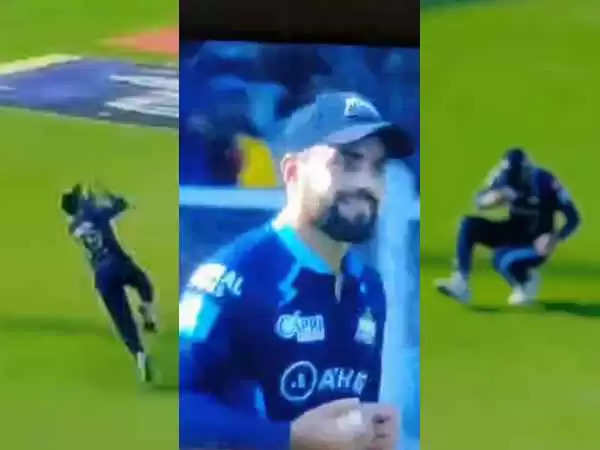 It is the last weekend of April and the first of two games on Saturday is witnessing top of the table of Gujarat Titans take on 5th place RCB. Both teams made one change, Suyash Prabhudesai was replaced by Mahipal Lomror and GT replaced Yash Dayal with Pradeep Sangwan. RCB won the toss and chose to bat first as they made to put the GT bowlers under pressure. The eyes of the world was on Kohli as he was looking to put his bad form behind.

Rashid Khan pulls of a screamer –

Rashid Khan bas been in form, not with the ball, but with the bat. Just days after playing a 31 off 11 ball knock versus SRH, the Afghanistan bowler did something spectacular against RCB. Glenn Maxwell was looking dangerous with the bat, as he was on 33 off 17 balls with 3 fours and 2 sixes. That’s when Ferguson bowled a low full toss and went straight up in the air. Rashid Khan made good ground to take a stunning catch while tumbling behind to hold on to a difficult chance to send back Maxwell for 33.

Virat Kohli comes back to form with a 50 –

After a lean patch with the bat, the former India and RCB captain was showing his full range of strokes. Kohli made his intentions clear first with a drive past the bowler and then a flick of his pads of Shami. Kohli scored his first 50 of the season after scoring just 9 runs from the last 3 games, with two back to back first ball ducks. Kohli was finally out for 58 off 53 balls when he was bowled by Shami. His innings had 6 fours and one six.

Apart from Kohli, it was Rajat Patidar who scored his first IPL 50, and the right hander from MP playing his 6th IPL game was showing his talents. Patidar scored 52 of 32 balls with 5 fours and 2 sixes. Mahipal Lomror came out towards the end and swung his bat for 16 off 8 balls with 2 fours and a six. RCB ended their innings at 170 on a hot and humid day at the Brabourne stadium in Mumbai.