Watch! Rinku Singh and Sam Billings clash with the umpires over DRS Call 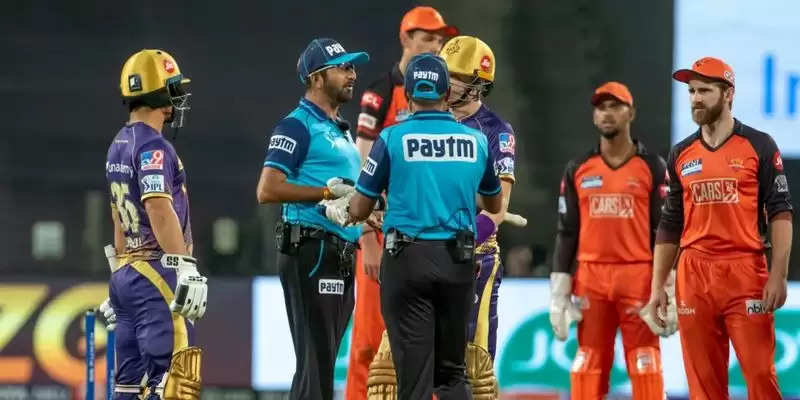 The umpiring in TATA IPL 2022 has been one to forget as the Indian umpires have been totally abysmal. There have been so many decisions or moments where the players and teams have been at the end of poor officiating. The entire IPL has been marred with such poor officiating that, even if a player is given the correct decision it is still taken with a pinch of salt. On Saturday the game between KKR and SRH at the MCA stadium in Pune, saw yet another conflict between the umpire and the players.

Sam Billings and Rinku Singh versus the umpires –

The said incident occurred in the 12th over with Rinku Singh facing up to Natarajan. The left handed batsman was struck on the pads on the full by the left arm pacer. The man from Tamil Nadu wasn’t given the decision, despite it looking plumb. Just when Natarajan had lost hope, the finger went up and the umpire gave Rinku Singh out LBW. The two batsmen had a mid-pitch conversation about going upstairs for a review. That’s when Anil Chaudhary waved his arms and said time out.

The entire confusion happened due to the fact that Rinku Singh did not go up for the DRS himself. It was Sam Billings who called for the review, and that doesn’t count as the rule of the law states that, even the batsman against whom the decision is given has to ask for the DRS. This led to a huge debate between the two players as they were seen having an animated conversation with the umpire. In the case of the DRS being taken, it was still going to be out as the hawk-eye showed the ball crashing into the stumps.

Coming into the game, both KKR and SRH needed a win to keep their play-off hopes alive. KKR batted first and scored an imposing 177 on the board and they have one man to thank. Andre Russell, scored a brilliant 49 not out off 28 balls with 3 fours and 4 sixes.

SRH slump to yet another loss

Chasing 178 to win, SRH failed to get going again courtesy their captain Kane Williamson. The Kiwi batsman who is undergoing poor form slowed the chase with his 17 ball 9 before falling to Russell. Abhishek Sharma with 43 and Aiden Markram with 32 were the only bright spots for SRH. The KKR bowlers kept their lines and lengths tight, as SRH finished on 123 for 8 and lost the game by 54 runs.

The cricket fans on Twitter, were confused when the whole saga began. Soon they came out in force and had a go at the two KKR batters. While some seemed to take the side of Rinku Singh and felt that he was hard done by. You can read the tweets from the cricket fans embedded below.

There was a powercut of timer for Rinku Singh. #IPL

There was a powercut of timer for Rinku Singh. #IPL