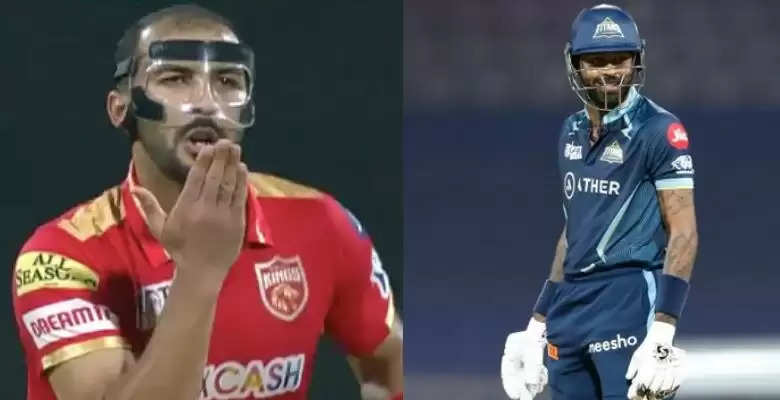 TATA IPL 2022 has been one to remember for Hardik Pandya so far in all departments, after a pathetic 2021 where he seemed a shell of his former self, 28 year old from Baroda has showed the world what he is made off. After being released by Mumbai Indians, the Baroda based all rounder was picked by Gujarat Titans as the first draft pick and made the captain. So far the titans have played 9 games losing just 1 and winning 8. This has put them in firm place to qualify for the final four and become the first team to do so.

Rishi Dhawan gives a send off to Pandya –

Hardik Pandya won the toss and chose to bat first, Gujarat lost their openers with Gill run out for 9, and Saha falling for 21. With the score reading 44 and Sai Sudarshan at the other end, Pandya got an outside edge off his bat and was caught behind by Jitesh Sharma for one off 7 balls. This got an animated response from Dhawan who blew a kiss to Pandya and was seen celebrating with pumped up aggression. This is Dhawan’s 2nd game of the IPL with his return game against CSK being his first in 6 years. He was still wearing the face mask he sported in the match against CSK.

Young Sai Sudarshan was the sole man fighting for the Titans when he stayed not out on 65 from 50 balls with 5 fours and a six. Apart from Sudarshan, only Saha with 21 was the next top scorer. Miller and Tewatia both scored 11 as GT reached 143 on the board. For PBKS, it was Rabada who did the star turn with the ball as he picked 4 for 33 from his 4 overs. Along with Rishi Dhawan, Livingstone and Arshdeep picked a wicket each.

PBKS have to win the game to stay alive in the IPL while a win for GT will see them become the 1st team to reach the final 4.