Watch! Rohit Sharma gets miffed with yet another poor umpiring decision 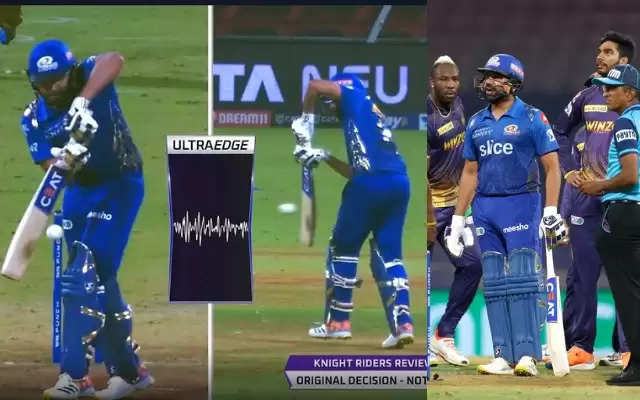 Mumbai Indians on Monday lost to Kolkata Knight Riders by 52 runs to stay rooted bottom of the table. Just when the fans thought the men in blue and gold were turning a corner, the frailties of Mumbai’s batting came to the fore as they fell like nine pins while chasing the 166 set by the 2 time champs. One of the biggest talking points was the dismissal of Rohit Sharma which has sparked off another round of debate about the umpiring that has been witnessed during this season of TATA IPL 2022.

Rohit Sharma who seemed to have gotten his form back during his knock against Gujarat last game was looking to continue the same against KKR. The Mumbai captain has a good record against KKR. Opening with Ishan Kishan the Mumbai pair were tasked with the job of chasing 166 to win. That’s when the ball apparently caught the edge of Rohit’s bat and flew low to the right hand side of Sheldon Jackson. The KKR wicket keeper went up with an appeal. The on-field umpire ruled it not out and the decision was sent upstairs for DRS. That’s when the ball was seen close to the bat and there were clear spikes on it. But what made it interesting was the fact that there were spikes on the ultra-edge technology even before the ball could make contact with the bat. The 3rd umpire asked the on-field umpire to over turn his decision and Rohit was on his way back to the hut.

How can the third umpire not see what we saw? Rohit was NOT OUT #MIvsKKR pic.twitter.com/UbbUH2BVcc

Series of Poor decision continue in the IPL –

It seems that the IPL has caught a pandemic of different sorts with all the bad and poor decisions coming to the fore. Now there will be huge questions raised about the technology as well as it is supposed to help the umpiring get better, but its adding more to the chaos. This entire has seen one controversy after another erupt. Sunday saw David Warner angrily stare at Nitin Menon after he was given out LBW, even though after referral it showed more than 50% of the ball was missing the stumps and the decision stayed as Umpire’s call which meant Warner had to go. The dismissal of Rohit Sharma not only shocked the fans but also the members of Mumbai Indians in their dugout.