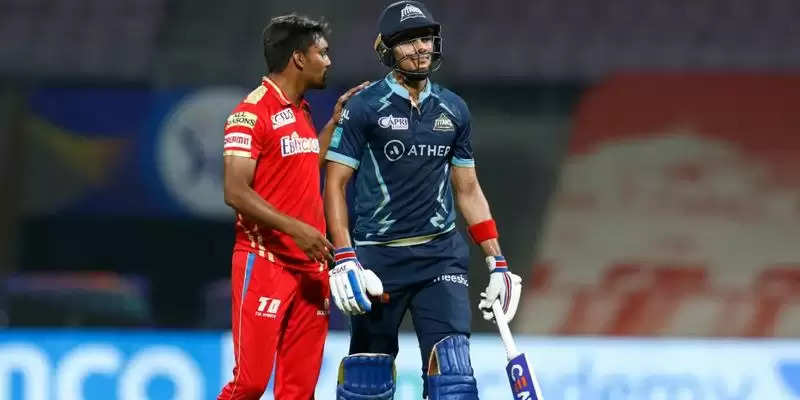 DY Patil on Tuesday is witnessing 48th Match of the TATA IPL 2022. Gujarat Titans are at the top of the table and a win will make them the first team to make the play-off places. Punjab Kings are also seeing topsy-turvy form after they lost their last game to LSG. Gujarat Titans won the toss and elected to bat first and even PBKS had wanted to bowl first. It is an important game for PBKS as a loss will dent their hopes of a place in the final 4.

GT opened the innings Shubman Gill and Wriddhiman Saha. The two batters gave GT a good start when they scored just runs in the first 2 overs. The 3rd overs first ball saw Shubman Gill look for a quick single and Sandeep Sharma fielding the ball and threw it at the bowlers end. The batter was found short of the crease and Gill turned around gave a cold stare to the Sandeep Sharma. The batsman had to change his line of running as the bowler was seen standing in the middle. For his part Sandeep Sharma wasn’t at fault as he did not impede or encroach onto the path Gill was running on.

Post the fall of Gill, the next wicket to go was Saha who scored 21 off 17 balls with 3 fours and a six. Saha added 17 for the 2nd wicket with Sai Sudharshan, Hardik Pandya was next to walk out and the GT captain was out for a slow 7 ball single. Pandya was dismissed by Rishi Dhawan off Jitesh Sharma. David Miller too couldn’t get going as he was sent back by Livingstone caught by Rabada for 11. At the time of writing GT were 98 for 4.

Shubman Gill and Sandeep Sharma who played for Punjab had shared the dressing room for a few years in the domestic cricket. The cricket fans on twitter weren’t impressed with the exchange as they took to twitter voice their displeasure.

How many times have i seen shubman gill getting run out, i guess many a times..