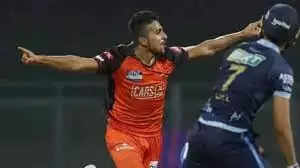 Wankhede Stadium on Wednesday witnessed a special game as Gujarat Titans and Sunrisers Hyderabad faced off against each other. The 40th match of the TATA IPL 2022 season saw the game go down to the wire with both teams taking proper shots at each other. The match was won by the Titans in the last ball not before the match swung around like a pendulum , as it took a 59 run stand between Tewatia and Rashid Khan to give Titans the win. With this win Hardik Pandya led side now sit atop the IPL table and look set to be the 1st team to make it to the final 4.

Amidst all the carnage with the bat from both the sides, there was one young man from Jammu and Kashmir who came to the fore. 22 year old Jammu Kashmir, speed sensation Umran Malik grabbed his 1st five wicket haul in the TATA IPL. Titans were chasing a humungous 196 to win, that’s when Shubman Gill and Wriddhiman Saha gave them a flying start with 69 runs for the 1st wicket from 7 overs. The 4th ball of the 8th over which was Malik’s opening over saw Gill give himself some room to hit over the offside. The batter from Punjab saw the ball pass him in a flash and the off-pole was laying flat on the ground. The next to go was captain Hardik Pandya who was caught in the 3rd man by Marco Jansen. Pandya was given a hostile welcome when he got a short ball and got hit on the forearm. This was the 2nd time Malik had done damage to the Titans skipper.

When Malik came back for his 2nd spell, the Titans were coasting with Saha playing well on 68 of 37 balls. The veteran test wicket keeper had hit 11 fours and one six in his innings. Just when it looked like Saha will take Titans home with ease, Malik bowled him neck and crop with a perfect yorker. The ball was recorded at 152.8 KPH and Malik pulled out the Steyn fist pump celebration. Malik then in his final over had GT in big trouble, first bowling Miller through the gate for 17. The South African went for a huge slog and saw his middle stump take a beating. The next ball to Abhinav Manohar was a wide ball but the last legal delivery of Malik’s spell did the trick. Malik bowled a stump to stump line to the right hander and saw the ball pass the bat in a jiffy to knock back the off-stump to give him his maiden 5 wicket haul.

Malik finished with figures of 5 for 25 from his 4 overs but couldn’t help his side win the game. The brilliance of Tewatia and Rashid Khan came to the fore as GT chased down 22 runs in the final over for a famous win. Malik won the man of the match and also the fastest ball of the match for the 8th time in succession.