Watch! Virat Kohli seems a broken man after yet another cheap dismissal 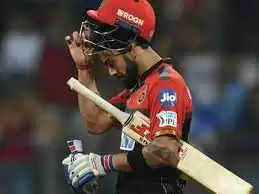 It is one of the biggest matches of the season for Royal Challengers Bangalore as a win will give them a chance to move into the 2nd place in the table. Punjab Kings also need a win to be in contention for a place in the final four of the tournament. The game which is being played at the Brabourne stadium is witnessing some high octane cricket and both the teams are going at each other like two boxers. One man who is under pressure is Virat Kohli who has been woefully out of form.

Punjab Kings had batted first and posted a huge 203 runs on the board and RCB were presented with a huge task. Chasing 204 to win in walked Kohli and Du Plessis. The duo seemed up for a challenge and to the task. Kohli began his innings with a beautiful cover drive off Arshdeep Singh and 2 balls later got another boundary. Next over he hit Brar for a huge six. It seemed like Kohli was finding his groove, just when it seemed like that it was all over. Rabada bowled a short ball and Kohli who had already backed away tried to pull the ball but was aghast to see Rahul Chahar grab an easy catch. He walked away not able to believe as he looked up at the sky to ask “where is my luck”

Bairstow and Livingstone pulverize RCB –
Batting first PBKS got a good start when Bairstow scored a 29 ball 66 with 7 sixes and 4 fours in his innings. He got his 50 from mere 21 balls before falling to Shahbaz Ahmed caught by Siraj. Livingstone has been one of the best batters of the tournament for PBKS and yet again he showed his class with a 41 ball 70 with 5 fours and 4 massive sixes. He was dismissed by Harshal Patel caught by Karthik and his innings helped PBKS reach a huge 203 runs on the board. For RCB, Josh Hazlewood recorded the costliest figures in this season of the TATA IPL with 64 runs from his 4 overs.