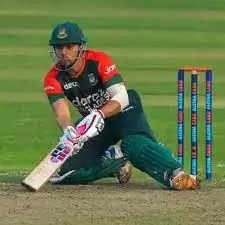 India and Bangladesh on Wednesday played out a classic as the two teams fought tooth and nail. India emerged winners by 5 runs as they went to the top of the table and took one step close to the Semi-Finals spot. The match had high drama right from the start as there was a huge rain interruption as well. Indian bowlers held their nerves as they won the game in a close tense affair.

Like any game between India and Bangladesh this match was no different with its drama and on -field antics. Once the rain came, Bangladesh were coasting at 66/0 from 7 overs 17 runs ahead of India on the DLS method. With the weather clearing and the umpires asking the players to resume that’s when the whole drama began.

Virat Kohli has been a thorn in the flesh of Bangladesh for a long time now. The 33 year old on Wednesday played yet another match winning knock at the Adelaide Oval. Kohli was man of the match for his 64 run unbeaten knock to take India to the cusp of qualification for the Semi-Finals.

Nurul Hasan the Bangladeshi wicket keeper said while speaking to reporters said that the umpires missed a “Fake Fielding” incident by Kohli. Had this been noted India would have been given a 5 run penalty, which was the final tally of runs with which India won the game.

When did this occur?

According to Nurul Hasan and Bangladesh the incident occurred during only over by Axar Patel. It was Arshdeep Singh who was throwing the ball and Kohli feigned as if he was going to have a throw at the stumps. According to Hasan and the Bangladeshi camp umpires Marais Erasmus and Chris Brown did not spot this incident which could have cost India five penalty runs after MCC made “fake fielding” move a banned practice.

What does the law state?

According to the rules and law number 41.5 of the MCC “deliberate distraction, deception or obstruction of [the] batter", and if an incident is deemed to be a breach, the umpire can declare that particular delivery as dead ball, and award the batting side five runs”

What did Nurul Hasan say on this incident?