Duleep Trophy 2022: Indian player taken to hospital after getting hit by a throw 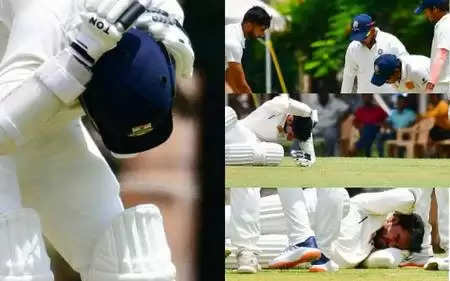 Indian domestic season for the Calendar Year 2022 has begun with the Duleep Trophy game. There are two Semi Final games going on, the first is the clash between Central Zone and West Zone. The 2nd clash is between North and South Zone and both the matches are being played at Coimbatore. The game between Central and West Zone is on a knifes edge as the day two nears its end.

KKR all rounder and India player, Venkatesh Iyer was in the middle of a freak incident. When he was batting on 6 not out, he got hit on his neck by a wayward throw by Gujarat medium pacer Chintan Gaja. The batter fell down and there was moment of uneasiness when the ambulance arrived on the field.

Unpleasant scene here. Venkatesh Iyer has been hit on the shoulder as Gaja throws the ball defended ball back at the batter. Venkatesh is down on the ground in pain and the ambulance arrives. #DuleepTrophy pic.twitter.com/TCvWbdgXFp

Iyer comes out to bat again –

The moments of unease ended, when the left hander came out to bat again and scored 14 off mere 9 balls. Iyer hit 2 fours and a six in his innings before falling to Tanush Kotian caught behind by Het Patel to become the 8th batter to be dismissed.

After bowling out West Zone for 257 in the first innings, Central Zone were looking to take a huge lead in the 1st innings. The West Zone bowlers though, had other plans. Jaydev Unadkat with 3 wickets rocked the Central team early. He got the wickets of MP openers, Yash Dubey and Himanshu Mantri. Tanush Kotian was the other top wicket taker with 3 wickets. Karan Sharma, the UP Skipper was the top scorer for Central Zone with 34 runs.

Armed with a 129 run lead, Prithvi Shaw the out of favor Indian opener was on 56 off 45 balls at the time of writing. He had lost his opening partner, Yashasvi Jaiswal for 3, while skipper Rahane was keeping him company on 12 not out. West were 75 for 1 after 13 overs with a lead of 204.