English Cricket: Jofra Archer shuts up an Indian journalist who tried to troll him – 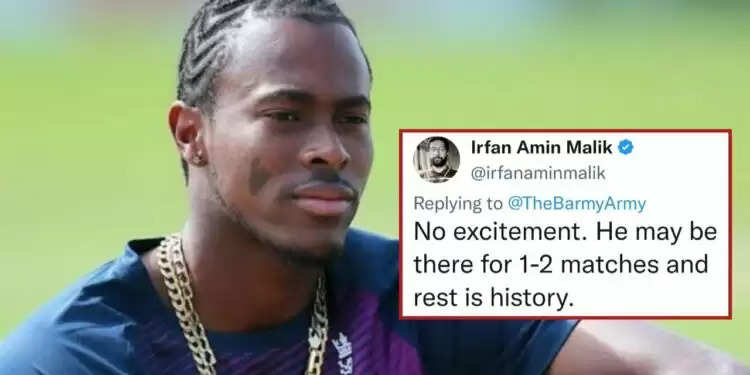 Jofra Archer has been one of the most exciting characters and talents ever since he laid foot on the cricket field. The soon to be 28 year old has just made his comeback to the cricket field.  This comes after prolonged time out of the game due to injury which has seen Archer miss nearly 2 years of action. Archer has recently made his comeback to cricket during the ongoing first season of SA20.

Jofra Archer has made a comeback to top flight cricket during the SA20 league. The 27 year old is currently playing for the Mumbai Indians Cape Town team in the league. Ahead of his first competitive game, Barmy Army posted a picture of Archer and wrote “how excited are you to see him back in a England shirt?”

How excited are you to see him back in an England shirt? 😍😍😍 pic.twitter.com/OSnWkefEsU

One journalist named Irfan Amin Malik while replying to Barmy Army said “no excitement. He may be there for 1-2 matches and rest is history”. This tweet did not sit down well with a lot of fans, but Archer had a different take in this. Archer put out a meme which had a caption which read “here’s the attention you ordered”

No excitement. He may be there for 1-2 matches and rest is history.

Jofra Archer picked 3/27 on his return to competitive cricket for the Mumbai Indians Cape Town against Paarl Royals. Archer bowled his full quota of 4 overs as well as bowling a maiden over. Archer is scheduled to be part of the England side which is to play the South African side in a 3 match ODI series.

Archer is also scheduled to make his return to IPL with Mumbai Indians and possibly build a dream partnership with Jasprit Bumrah. Archer is a huge part of England cricket and helped them win their maiden ODI world cup in 2019. England are scheduled to play the ICC World Cup in 2023 in a bid to retain the crown and also play the Ashes last this year.