Fans chant Dinesh Karthik’s name instead of Murali Vijay; the cricketer urges the audience to stop 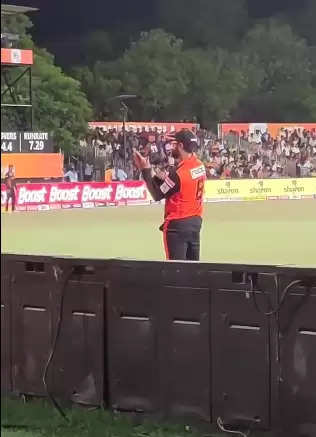 Murali Vijay and Dinesh Karthik are two stalwarts of the Indian Cricket Team. Karthik has recently got back to the team in the T20 format and has won the hearts of the audience by his trendomous performance.While Vijay is making the news in Tamil Nadu Premier League.

Murali Vijay is making a comeback in cricket at Tamil Nadu Premier League and has scored a century for his team Ruby Tricky Warriors. His team is out of the tournament, but his individual performance has impressed everyone. But during the century, something strange happened and the spectators were chanting the name of Dinesh Karthik instead of Murali Vijay.

As Murali Vijay and Dinesh karthik share a history in their personal life. The Indian wicket keeper's wife had an affair with Murali Vijay, due to which Karthik and his first wife got separated. Then,  Karthik’s wife married Murali Vijay and Karthik later married squash star Dipika Pallikal. In one of the matches of TNPL, fans chant Dinesh Karthik’s name in front of Vijay and the cricketer felt really uncomfortable.

When the fans were chanting Dinesh Kartik’s name, Vijay felt uneasy and plead the fans to stop the chants. It was definitely an embarrassing moment for the cricketer and indeed a shameful act on part of the fans. The video of Vijay pleading to the fans to stop chanting the name of Karthik has gone viral, where Vijay is asking the fans what they are trying to do.

Talking about the tournament, Nella Royal Kings are in the first position and will play the first qualifier against Chepauk Super Gillies, who was second on the table.

The league will end on 31st July with the final in Coimbatore.