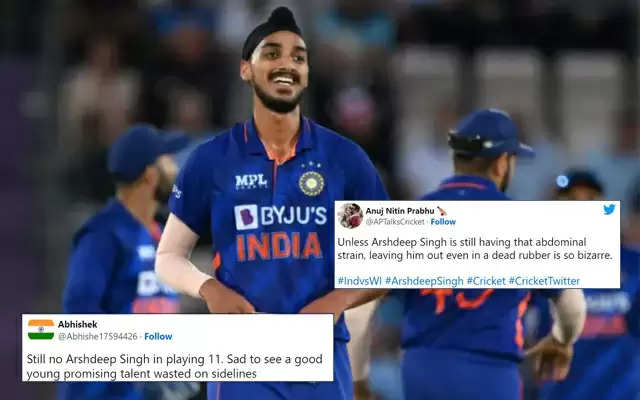 India took on West Indies in the final ODI of the 3 match series after having already sealed the series on Sunday. The final match like the first two was played at the Queens Park Oval at Trinidad and Tobago. India came into the game looking for a clean sweep over the hosts, while the Pooran led side wanted to stop a run of 5 consecutive losses in ODI cricket. The West Indians had lost the series to Bangladesh prior to play the Indian team in the ODI format.

In a rather surprising call, India won the toss and chose to bat first which wasn’t the surprise, but the non inclusion of Arshdeep Singh was. Many were expecting the youngster to be given maiden ODI cap any replace either Thakur, Siraj or Avesh in the playing XI. Arshdeep who made his T20 debut against England at Southampton impressed one and all with his pace and swing with the new ball. Arshdeep warmed the benches for the final 2 games and also wasn’t picked for the 3 match ODI series in England.

A look at our Playing XI for the final ODI.

One change for #TeamIndia. Prasidh Krishna comes in for Avesh Khan.

Ravindra Jadeja was not available for selection for the 3rd ODI since he is still not 100 percent fit.The medical team will continue to monitor his progress.#WIvIND pic.twitter.com/4bkh524SBu

Avesh Khan who made his debut during the 2nd ODI was impressive with the bat in the dying stages of the game. It was his bowling though which left everyone looking for more as he was carted for runs all over the park. Krishna who bowled well in the 1st game was bought back into the team.

The home side welcomed back former skipper Jason Holder who has come back to full health post COVID. The home side also got Keemo Paul and Keacy Carty in for Romario Shepherd, Joseph and Rovman Powell.

The Indian cricket fans who hoped to see Arshdeep get his cap well left angry and sad at the youngster not playing. All the fans took to twitter to have their say on the topic and weren’t particularly pleased with Rahul Dravid the Indian team coach.

Arshdeep Singh is a young bright talent
He should have played today's ODI
Indian cricket team should give chances to all players selected for a particular tour.#IndvsWI #ArshdeepSingh