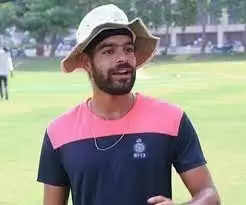 Indian cricket and its Board are known to be the best in the world for the sheer amount of money they pump into the game. Ever since the start of the Indian Premier League in 2008, the Indian cricketers make a lot of money, whether they are international cricketers or even the Ranji trophy or domestic cricketers. The game on many occasions has seen its name being sullied by the nefarious activities the players have done, but now a former IPL cricketer is in trouble with the law of the land.

30 year old Harpreet Singh Bhatia may not be a well known names to many cricket fans, but the left hander is a well known name in the domestic circuit. Bhatia is the captain of the Chhattisgarh Ranji team. The year old has currently found himself in trouble with law and has been charged with cheating. Bhatia had recently applied for the job with the role of auditor and accountant with the Indian audit accounts department office of the principal Accountant general audit from the state of Chhattisgarh city of Raipur. The allegation against the 30 year old is that he has submitted fake documents to procure the job along with the required marks certificate. The incident happened in 2014 and the concerned authorities had contacted the University to verify the Bachelor of Commerce certificate which had been submitted. The University of Bundelkhand confirmed to the concerned department that no person was issued with such certificates and Harpreet Singh Bhatia now finds cases filed under IPC section 420 and 467 filed against him.

Harpreet Singh Bhatia was part of the Indian under-19 world cup team under Ashok Maneria. The 30 year old who hails from Madhya Pradesh made his Ranji debut for MP in the year 2009. He has played 70 Ranji games so far and scored 4489 runs with an average of 47.7 with 14 centuries and 22 fifties. He has also played 77 List A games scoring 2507 runs with 4 centuries and 12 half centuries averaging 41. In the T20 format he has played 71 games scoring 2006 runs with a best of 92 not out and 15 half centuries with a strike rate of 125. He has played 4 IPL games and was associated with the likes of KKR, RCB and Pune Warriors India.